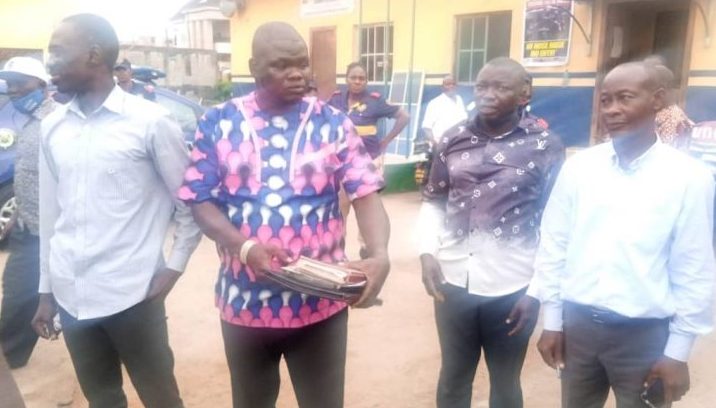 Magistrate Lateef Layeni sitting at the Special Offences (Mobile) Court over the weekend at Bolade, Oshodi remanded four men in prison custody for impersonating environmental officials and extorting unsuspecting members of the public.

The four men: Afolayan Nurudeen (41), Fowowe Oluseyi (40), Kayode Olaleye (47) and Muibi Babatunde (50), who were arraigned on a four count charge, pleaded not guilty when their plea was taken.

They were arraigned for impersonating public officers by representing themselves as staffs of the Ministry of the Environment and Water Resources to the public and fraudulently using false documents with the intention that the documents shall be used and acted upon as genuine.

They were also charged for conspiring to commit felony and conducting themselves in a manner likely to cause a breach of peace.

The presiding Magistrate thereafter fixed March 30 for the commencement of the trial of the accused persons and ruled that they be remanded at Badagry Prison.

The four men were arrested on March 17 at about 3:45pm at Golden Face Hotels, Orile Iganmu by Lagos State Neighbourhood Safety officials with assistance from the Ministry of the Environment and Water Resources officials following a surveillance on the men.

Items found on the men included fake inspection letters, identification cards, Abatement notices of the Ministry of the Environment and Water Resources, Lagos State Wastewater Management Office (LSMWO), copy of court summons and stickers for certification of decontamination, all bearing the logo of the Lagos State Government.

The Ministry of the Environment and Water Resources had been inundated with complaints and reports from members of the public about the activities of some men who usually extort money on the pretext of enforcing sanitation laws in different parts of the state.

This prompted the ministry officials to liaise with officials of Lagos State Neighbourhood Safety Corps to be on the surveillance for the men who had been operating in the Orile Iganmu area for quite a while before they were apprehended.