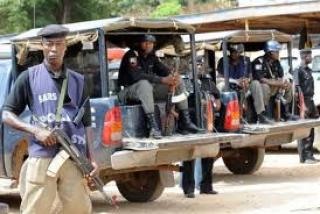 Four cult members were on Monday docked before an Ebute Meta Chief Magistrates’ Court in Lagos over the alleged murder of their leader.
Taofeek Saludeen, 26; Rasaq Oseni, 23; Teslim Yusuf, 27; and Ibrahim Adewoye, 35, were alleged to have stabbed their leader, Segun Ogbere, to death on December 10, 2013.
The accused, who reside at Bariga, Lagos, are facing a two-count charge of conspiracy and murder.
The Prosecutor, Inspector Feddy Asu, told the court that the accused committed the offences at Abule-Oja Area of Lagos.
Asu said the deceased, who was to be crowned as the leader of the Ilaje group, was earlier in the court to testify in a trial case of the former leader of the group, Kayode Ayetiwa.
Asu said the deceased, who left the court premises in a tricycle, was trailed by the accused and “they stabbed him to death”.
Asu said the offence contravened Sections 221 and 231 of the Criminal Law of Lagos State, 2011.
Section 221 of the Criminal Law of Lagos State states that a person who commits the offence of murder shall be sentenced to death.
The pleas of the accused were, however, not taken.
The Magistrate, E.O. Ogunkanmi, directed that the accused be remanded in prison custody, pending advice from the Office of the Director of Public Prosecutions and adjourned the case till February 17 for further hearing.