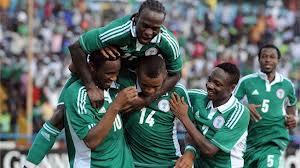 ome football enthusiasts have expressed optimism that Super Eagles  would defeat Uruguay in  their second group B match at  the  ongoing FIFA Confederations Cup tournament  in Brazil.

They told the News Agency of Nigeria in Abuja on Wednesday that the African champions should face the Uruguayans with renewed vigour after thrashing Tahiti in their first group match 6-1.

A board member of the Nigeria Football Association (NFA), Mrs Dilichukwu Onyedinma, said the Super Eagles only needed to be a little more focused to beat Uruguay.

“The Super Eagles must not develop false sense of security because the Uruguayans will present a stiffer test of their abilities than the Oceania champions,’’ she said.

Onyedinma, who doubles as the Chairperson of the Nigeria Women League, urged the coaching crew to strengthen the Eagles’ defence so as to ward off the Uruguayan attackers.

“Our defence needs to be water-tight so as not to make avoidable errors during the match.

“We are happy that Keshi promised to make some changes at the back in a bid to contain the energetic attack by Uruguay’s Edinson Cavani and Luis Suarez,’’ she said.

The Secretary of FCT Football Association, Alhaji Ibrahim Abdullahi, called on the Super Eagles to convert their chances at goal in order to carry the day.

“They must not be wasteful like they did in the game against Tahiti when they squandered a lot of gilt-edged opportunities. They must be composed in front of goal,’’ he said.

Abdullahi said Keshi should adopt an attacking strategy during the match as the best way to defend is to attack opponents.

A sports analyst, Malam Ahmed Ibrahim, said the Super Eagles had the capacity to beat Uruguay but that they must adhere to their game plan and play with strength and as a team.

According to him, the Super Eagles should demonstrate total commitment throughout the 90 minutes to be able to edge out their opponents.

“What we did at the Nations Cup is still fresh in everybody’s mind.

“We know the key players in Uruguay, we know their attacking prowess. All we need to do is to curtail their moves by ensuring that the ball doesn’t get to them.

“If the man does not get the ball, how does he score?

“The Uruguayan attackers have the speed and physical strength to play their style. We need to be extra vigilant because the referee is not likely to see everything.

I predict that the Super Eagle will defeat Uruguay by two goals to one,’’ Ibrahim added.