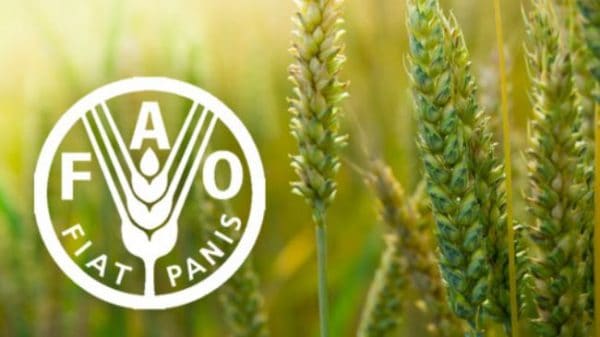 Share
Facebook Twitter LinkedIn Pinterest Email
The Food and Agricultural Organisation has promised Nigeria continued support in its drive toward ensuring food security and zero hunger in the future.
FAO Country Representative in Nigeria, Suffyan Koroma, made the promise in an interview with the News Agency of Nigeria in Abuja on Wednesday as the body marks 40 years of operations in the country.
According to Koroma, because global hunger is rising again after a period of significant reduction, FAO has seen the need to assist Nigeria in its quest to achieve Zero Hunger Sustainable Development Goal 2 by supporting the Federal Government’s development agenda.
Although FAO officially opened its representation in Nigeria in 1978, it began working closely with the Federal Government to promote agricultural production as early as 1950.
In 1961, the Federal Government requested FAO to map out a strategic medium to long-term plan to develop agriculture in Nigeria.
“Two years after in 1963, FAO submitted a report titled: ‘Agriculture Development in Nigeria 1964-1980.’”
Koroma added that in the past 40 years in Nigeria, FAO had achieved a lot in various agricultural development initiatives and interventions.
He said: “Other areas include institutional structuring and human resources capacity development in forestry, forest industries, agricultural statistics, cooperatives and marketing.
He said that Nigeria and the FAO had in the past decade worked collaboratively to develop a comprehensive food crisis response programme that addressed the causes and effects of soaring food prices in the country.
He said in furtherance of the National Fadama Development Project 11 and 111, $128 million was invested to significantly increase the income of farmers, pastoralists, hunters, and service providers across the country.
Similarly, $508 million was invested in erosion and watershed management as well as climate change adaptation.
According to Koroma, the importance of value chain development in the fight against hunger cannot be over-emphasised.
He said to that end, the FAO was working within the framework of the Agriculture Promotional Policy with emphasis on community and youth-focused value chain activities.
He said: “A pilot food Africa project to promote value chain development in vegetable crops has also been established, while value chains for fish, rice, and cassava are being supported.
“There is also integrated national programme that promotes improved income generation opportunities and decent employments for the youth in rural areas.”
According to Koroma, FAO and other development partners have been championing actions that can help combat climate change, reverse desertification, and stave off under-nutrition and food insecurity.
He said: “Across the country FAO supports the activities of the Great Green Wall, promotes sustainable land through the implementation of action against desertification in Bauchi, Jigawa, and Sokoto states.
“Activities are driven by community members with the support of government and civil society organisations.”
Koroma said FAO would continue to support agriculture-related emergency response and rehabilitation in crops and animal health.
He identified the control and eradication of avian influenza and the Fall Army Warm as the most recent actions in furtherance of agriculture-related emergency response and rehabilitation.
The country representative assured the Federal Government that households in the North East affected by insurgency would continue to receive recovery support to ensure food security and boost nutrition levels while rolling back hunger.
Post Views: 0
fao Food and Agricultural Organisation Food security Suffyan Koroma Technical support Zero Hunger
Share. Facebook Twitter Pinterest LinkedIn Tumblr Email