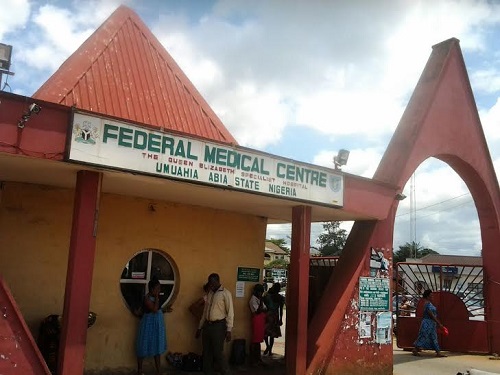 The Association of Resident Doctors of the Federal Medical Centre, Umuahia, Abia State has given its management till weekend to honour the agreement reached for the suspension of its 17 weeks industrial action or risk indefinite strike.
The ARD gave this warning following what it described as the FMC management’s disrespect of the agreement it reached on October 5, 2015 based on the intervention of Abia State prominent politician cum elder statesman, Chief Benjamin Apugo, which led to the suspension of the strike on October 6, 2015.
In a letter titled: “Notice of Withdrawal of Services,” dated November 16, 2015, addressed to the Medical Director, Dr. Chuku Abali, and signed by the Association’s President and General Secretary, Dr. Okeke Arinze and Dr. Ezuruike Ezinwa, the ARD warned that it will withdraw the services of its members from midnight ofNovember 28, 2015 if the agreement reached was not honoured.
The letter said: “On Friday, the 6th of November, the management of FMC Umuahia breached those agreements reached through the intervention of Chief B.B Apugo without any recourse to the Association.
“Since then, we have received no official communication from the management despite all our efforts at reaching out to them.
“To this end, the Congress hereby states that there will be an immediate and complete withdrawal of services of her members from 0000 hours, Saturday the 28th of November 2015 if by 1600 hours of Friday, the 27th of November 2015 the conditions have not been established.”
The conditions given by the association as basis for the suspension of the strike and which the FMC management agreed to meet, according to the letter, included the immediate recommencement of resident doctors’ call meals and the payment of 50 per cent proper placement for October 2015 to Senior Registrars and continued payment to all Registrars and Senior Registrars in subsequent salaries.
Others were the payment of arrears of proper placement to outgone and present house officers and the immediate payment of monetized call meals to their residents from July 8, 2015 to November 28, 2015, the period of which no call meal was made available to residents on call.
Speaking further on the development, Arinze said the two weeks stay of execution given to the FMC management was to give peace a chance despite the efforts of the Dr.  Abali-led administration to portray the ARD as strike mongers.
According to him, after the intervention of Chief Apugo, where they tabled their demands and an agreement was reached, Abali pleaded that they accept August salary while September will be paid with October due to paucity of funds.
Arinze added: “Out of respect to Chief Apugo and Abians in general, we agreed. This was paid Monday the 5th of October, and we suspended the strike on Tuesday the 6th and work started
“On Friday, the 6th of November, payments were made. The house officers were paid the improperly placed salary, no arrears of proper placement paid to them. Only registrars were paid 50 per cent proper placement.
“This was done without any discussion between management and the ARD, despite a clearly written communiqué that strike will be automatically restarted if the agreement was breached. Till date, no official communication has been received from FMC Umuahia management. Their excuse was that the MD was not available.”
Dr. Arinze, who revealed that FMC management has not remitted any check off dues collected from members’ salaries to the ARD since August 2015 in order to strangle the association financially, however, said the association has restrained from immediate recommencement of her industrial action despite the breach of trust out of respect to the new Federal Ministers of Health, Medical Elders, Chief Apugo and the good people of Abia State.
He added: “We pray that the management will use this opportunity to ensure lasting industrial harmony in Federal Medical Centre Umuahia.
“We have shown restraint and understanding in the face of utter disregard of FMC Umuahia management to their commitments. Restraint is not weakness.”

How to prevent full-blown attack of migraine headache – Expert