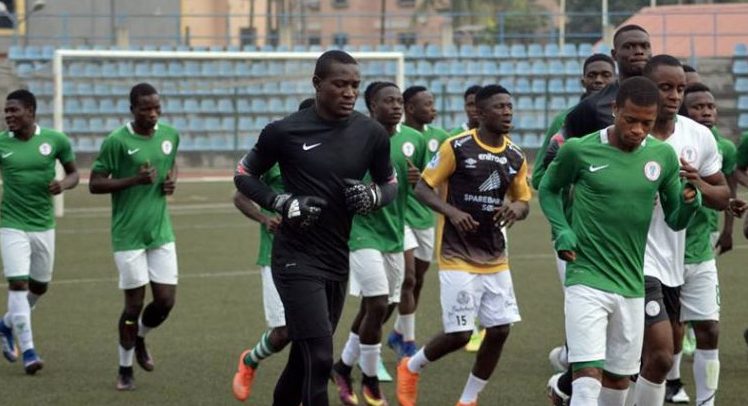 The national U-20 football team, the Flying Eagles, on Saturday, defeated the Nigerian Army Guards Brigade Team, the Scorpions 4-1 in a friendly match.

The match was played at the Guards Brigade Sports Arena, at the Aguyi Ironsi Cantonment, Asokoro, Abuja.

Hassan Husseini opened scoring for the Flying Eagles in the 23rd minute, with a header after which the equaliser came from Lance Cpl. Sunday Ibitayo for the Scorpions from a corner kick in the 53rd minute.

Peter Olawale scored the second goal for the Flying Eagles through a spectacular strike in the 57th minute.

Nasiru Jibril made it 3-1 for the Flying Eagles in 60th minute while Farayola Olawale made it 4-1 in the 81st minutes.

Okwoli said the friendly match was organised to prepare their team for the Nigerian Army League in line with the passion for sports by the Chief of Army Staff, Lt.-Gen. Tukur Buratai.

He said that the Flying Eagles were a good team to tackle, while commending the army team for the show of excellence during the match.

According to him, they have fashioned out a schedule of friendly matches for the Scorpion Football Team ahead of the league proper.

“I came here not knowing which team to support, but the quality from the first half I have seen shows that the Flying Eagles are a very good team.

“Our team is also a good team and beyond this match, we are trying to build up a very formidable team to represent the army in future international sports,” he said.

The Head Coach of the Flying Eagles, Ladan Bosso, said the team had played a numbers of friendly matches in preparation for the West African Football Union (WAFU) competition coming up in Niger Republic.

Bosso said that he was more concerned about building a formidable team that would be good in all areas, adding that the friendly matches would help him to identify gaps in his team.

He commended the team for their scoring ability, saying they had played seven consecutive games so far and won all.

“When you are going for international tournament your defence must be perfect otherwise it will cause you goals.

“So far it is work in progress because whatever lapses we observed from our friendly matches we build on it at our training session,” he said.

Also the Captain of the Flying Eagles, Chibueze Lambert, said the match was tough one, adding that they had to show their superiority as a national team at the end.

Lambert said the opposing team were good while the eagles were a better side.

He assured that the team would do Nigeria proud in the next international competition.

Similarly, the Captain of the Scorpions, Staff Sgt. Emperor Bature, said the friendly match was a good experience playing against a national team.

Bature said his team had learnt a lot from the Flying Eagles during the encounter, adding that they would build on what they have learnt from the national team.

He said that the mistakes observed from the encounter in terms of the recovery rate from the midfield would be worked on going forward.