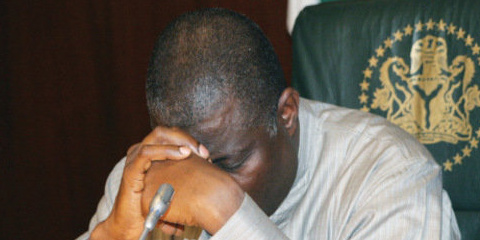 The Otuoke-Onuebum Road in Ogbia Local Government Area of Bayelsa State has been taken over by flood.
Vehicles now pass through Elebele Road, which is a longer distance.
Former President Goodluck Jonathan is from Otuoke.
Amos Agah told the News Agency of Nigeria in Otuoke on Saturday that passengers are now paying N800 instead of N400 from Otuoke to Onuebum.
Agah, a staff of the Federal University, Otuoke, appealed to the Bayelsa State Government to come to the aid of the community for the sake of FUO.
He said: “This was how it happened in October 2012 when flood took over the whole community.
“But up till now, there was no proper preventive measure put in place.
“We are expecting the government to come up with necessary measures to guard against future occurrence, but it is a matter of regret that such measures are not in place.
“The students of FUO will resume to school soon after their holidays.
“They are going to find things difficult if urgent action is not taken to mitigate the effect of the flood.
“I am calling on all relevant authorities to look into the matter because we cannot cope with it again this year.”
Also, Maureen Abute, a passenger, blamed the Bayelsa State Government for not properly utilising Flood Intervention Fund that was given to the state in 2012 to fight against flooding.
Abute said the people were suffering and they could not do anything because the government was not ready to live up to its responsibility of preventing flood and rehabilitating the road.
A taxi driver plying the road, Issac Chinedum, said the road was already in a bad shape before the flood sub-merged it.
Chinedum implored the Federal Government to come to the assistance of the people of Bayelsa State because the Bayelsa State Government had neglected the road over the years.
Chinedum said the youth in the community were the ones sand filling the road, adding: “The commercial drivers are paying them from the little profit they are making.”
NAN.