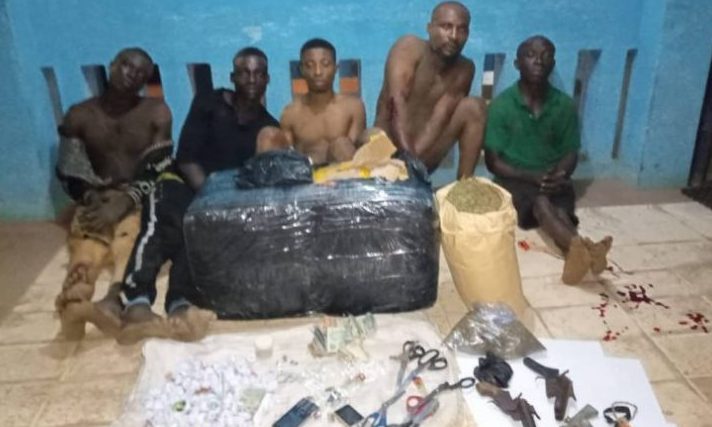 The Imo State Police Command has arrested five people suspected to be members of the proscribed Indigenous People of Biafra over the alleged killing of a Sergeant of Police, Joseph Nwaka.

This was contained in a release signed by the Command’s Public Relations Officer, SP Orlando Ikeokwu, and made available to newsmen in Owerri on Saturday.

Ikeokwu said the suspects were arrested in Isu Local Government Area of the state.

While some were arrested on Thursday, others were picked up on Friday by the Anti-Kidnapping Unit and other tactical teams of the command.

He also said that an AK 47 rifle with breech no 56-258115 and 15 rounds of live ammunition were recovered from the suspects.

Other items recovered were four locally fabricated weapons, six live cartridges and a large quantity of weeds suspected to be Indian hemp.

Ikeokwu added that the killers of Nwaka, who, until his recent death, was attached to the Command’s Department of Operations, made away with his AK 47 rifle.

According to him, one of the suspects, Onyekachi Mmadufor, of Umudurukwe, Isu LGA, confessed to being a member of the IPOB, who, along with his cohorts carried out attacks and killings of police and other security personnel.

He said: “The crime prevention and control strategies adopted by the Imo Police Command under the leadership of Commissioner of Police (CP) Abutu Yaro, to rid the state of activities of  the proscribed IPOB and other criminal elements are yielding positive results.

“On May 14, the CP deployed Anti-Kidnapping unit and other tactical teams of the command to Amanato Isu LGA for the  arrest of members of the IPOB but the hoodlums engaged them in a heavy gun duel.

“The operatives successfully repelled and dislodged them leading to the immediate arrest of five suspects while others escaped with possible gunshot wounds.

“Discreet investigation is in progress with a view to effecting further arrests, after which they will be charged to court for prosecution.”

Ikeokwu further said the CP commended the operatives for “a job well done” and enjoined them to sustain the tempo so as to ensure lasting security and safety of Imo residents and Nigerians at large.

Yaro urged the general public to support the Police and the state government in their efforts to ensure peace and tranquility of the state.