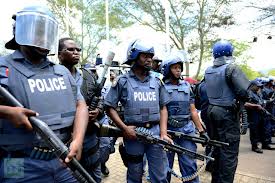 South Africa Independent Police Investigation Department has said that five police officers would soon appear in Polokowane Magistrate’s Court for allegedly assaulting and killing a Nigerian, Onyebuchi Iweaku, in police custody.
Moses Dlamini, IPID spokesperson, told the News Agency of Nigeria correspondent in Johannesburg on Thursday that the police have concluded investigations into the matter and had received a second autopsy report, which showed that Iweaku died from brutality from the hands of the police.
Deputy Director of IPID, Thabo Neholo, who spoke in a a telephone interview with NAN, did not however say when the suspects would be arraigned in court.
Neholo also told NAN that more than 500 police officers were also facing charges for various offences ranging from murder to fraud across the country.
He said: “We are dealing with a number of similar cases across the country and they are very serious.
“We have more than 500 cases on the court roll.”
NAN reports that Iweaku, who was living in Johannesburg, went to Polokwane to visit his cousin, Miracle Okoye, when six police officers were said to have forced their way into Okoye’s room and started beating the two Nigerians.
Okoye was said to have been lucky to run away during police raid, while Iweaku was taken to the police station, where he died in police custody as a result of injuries he sustained from the police brutality.
IPID provisional post mortem examination, signed by Dr. G. Perumal, had indicated that there was “no anatomical cause of death”, but this is not consistent with smothering, awaiting histology and toxicology result as contained in the medical report.
It will be recalled that in a search for solution to a similar case, on May 19, Okey Emuchay, the Consul-General of Nigeria Consulate in South Africa, presented a protest letter to the Deputy Director of IPID, Thabo Neholo, complaining about the handling of the investigation into the death of Obinna Ugbuaja in a Cape Town police station.
Ogbuaja was allegedly beaten to death by the police based on allegations that he swallowed drugs when the police went to arrest him at home over a suspicion that he was dealing in drugs.
Neholo said the result of the first autopsy was inclusive and promised a second autopsy and further investigations.
But Emuhay said foot dragging on the investigation was not acceptable to the Nigerian government.
Emuchay said the impending appearance of the police officers in court over the death of Iweaku would be a welcome development.
He said: “This will be a welcome development on the handling of IPID investigation of police brutality and murder of Nigerians while in police custody.
“The position of the Nigerian government is that, due process should be followed to arrest this alarming situation where our nationals are being killed by officers of the South Africa Police Service, in circumstance that are very unacceptable and unfortunate.”
Ikechukwu Anyene, President of the Nigerian Union in South Africa, said the arraignment of the police officers would be a positive move by the IPID.
Anyene said: “This is a positive move.
“We are happy that there is no intention to sweep this incident under the carpet.
“We are following the case closely with the Consul-General in Cape Town.
“We will make sure that justice is done.
“The steps taken so far by the IPID by investigating this matter and the plans to arraign the police officers for the alleged murder of a Nigerian in custody is a direct result of the Consul-General’s protest to the IPID over the handling of the circumstances surrounding the death Ogbuaja as a result of police brutality in police custody.
“The Consul-General should be highly commended for the bold step taken and his concern for the welfare of Nigerians in South Africa.
“The police have now realised that they cannot kill a Nigerian and get away with it.”