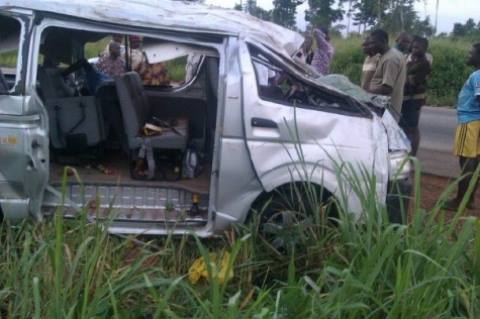 Five officers of the National Association of Nigerian Students died on Thursday in a motor accident on the Umuahia-Ikot Ekpene Road, the Federal Road Safety Corps said.
John Meheux, the Abia Sector Commander of FRSC, and NANS Director, Action and Mobilisation, Sunday Asefon, confirmed the incident to the News Agency of Nigeria in Abuja.
Meheux said the accident, which involved a truck and a mini-bus belonging to NANS, occurred at Ariam-Ndioru Junction in Ikwuano Local Government Area of Abia State.
The dead students are NANS Senate President, Donald Onukaogu; Abdulaziz Oladimeji, a candidate for the National President of the union from the University of Ibadan; Japhafa Duru, Zone B Assistant General Secretary; and Jerry Sorkar.
Four of the victims died on the spot, while one died on the way to the hospital.
He said that four others injured in the accident were at the intensive Care Unit of Federl Medical Centre, Umuahia.