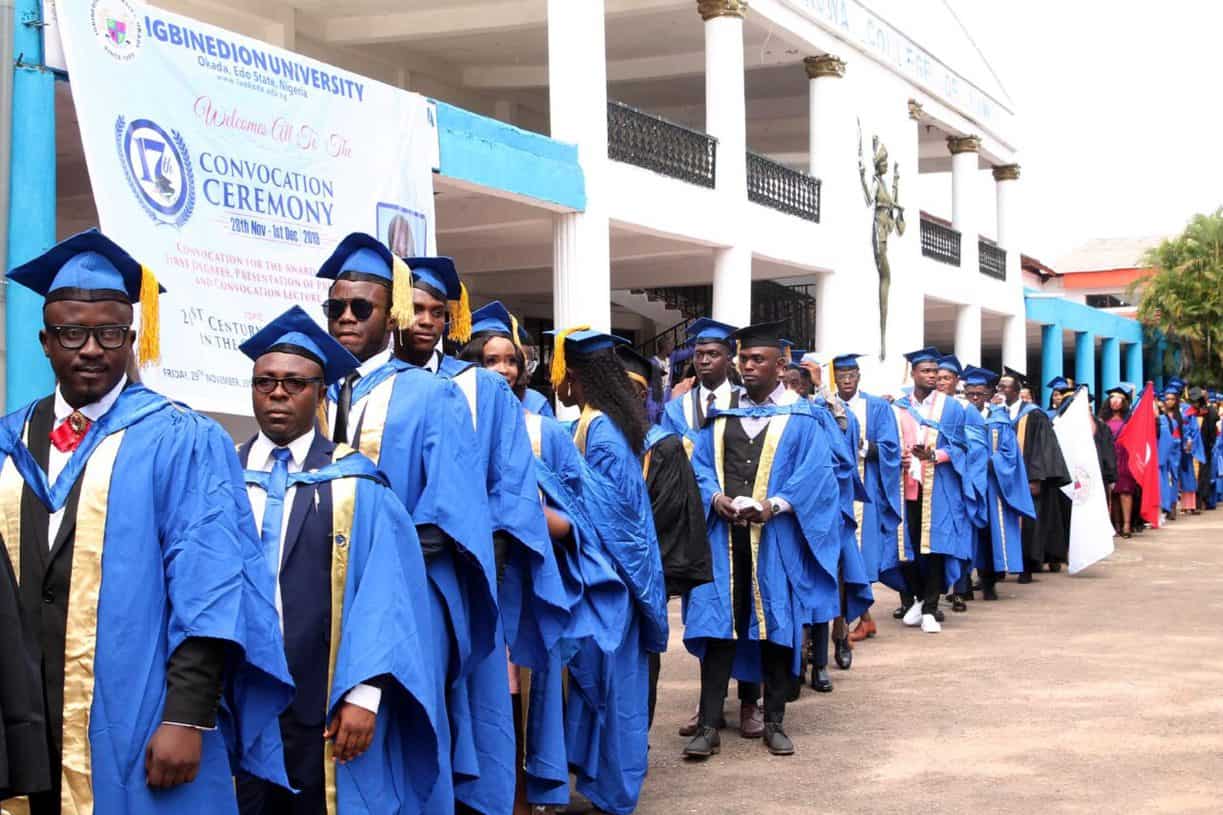 A female beneficiary of the Presidential Amnesty Programme on scholarship at Igbinedion University Okada, Edo State, Ovbude Queen Ohiolei, has emerged the overall best graduating student of the institution in 2019.
Twenty-six-year-old Ovbude, who was pregnant and delivered her first baby in her final year, clinched a first class degree in Mass Communication with a CGPA of 4.86 and the coveted prize for overall best graduating student.
She was among five beneficiaries of the Amnesty Programme on scholarship at IUO who graduated recently and were awarded first class degrees in various disciplines during the 17th convocation ceremony of the university held on November 29.
Others who bagged first class degrees included Munemune Ebitimi Arthur (Civil Engineering), Eregbene Tamar Emmanuel (Electrical-Electronics Engineering), Dabo Festus Itunuoluwa (Law) and Abdul Farida Francisca (Computer Science).
Apart from the quartet, 50 beneficiaries of the Amnesty Programme were also awarded second class upper division, just as 11 bagged Masters Degrees at the ceremony in which a total of 145 beneficiaries of the programme graduated.
This is the second consecutive year beneficiaries of the Amnesty Programme are bearing the torch at IUO.
At the 16th convocation ceremony of the university, a beneficiary of the programme, Afekuro Joseph Keritiemone, bagged first class degree in Political Science and Public Administration with a CGPA of 4.87, emerging the overall best graduating student.
He was offered automatic employment as a lecturer in the institution.
“The Amnesty Programme is a laudable programme. There are a lot of people who are intellectually better than me but because they don’t have the opportunity, many are languishing in the creeks. With the aid of this programme, I am here today; I am a lecturer in this highly esteemed university. I am appealing to the Federal Government to continue with the Amnesty Programme because it will bring out more intellectuals from the Niger Delta region,” Keritiemone said.
The President of the Presidential Amnesty Programme Students’ Union, IUO chapter, Umokoro Nesta Dimbainimboya, commended President Muhammadu Buhari and the Coordinator, PAP, Prof. Charles Dokubo, for the giant strides recorded, especially in the educational sector.
He said: “I just want to say a big thank you to the Coordinator, Presidential Amnesty Programme, Prof. Charles Dokubo and Mr. President for their determination in ensuring that the programme attains a huge success. The Amnesty Programme is an initiative of the late President Yar’Adua as a result of the insecurity in the Niger Delta. 10 years on, the programme that has changed many lives.
“As you can see, we have many first-class graduates from IUO as well as second class upper degree recipients. This school has produced many graduates that had stimulated the economy in the Niger Delta region and have been of great benefit to the Niger Delta people. By God’s grace, I know this programme will go far to impact on the whole world, not just the Niger Delta region or Nigeria as nation.”