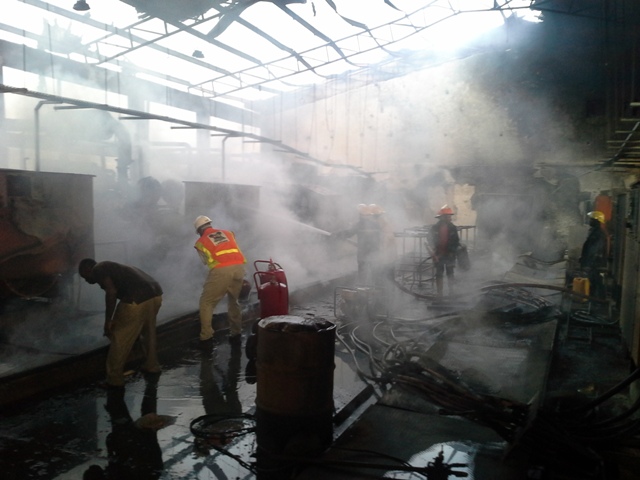 Property worth millions of naira were on Tuesday destroyed when fire consumed the main auditorium of Christ Embassy Church, located on Billings Way, Ikeja, Lagos.
The church is pastored by Chris Oyakhilome.
When Vanguard visited the scene, it was gathered that the fire started at 6.30pm from an apartment, which housed about 14 power generating sets.
It was further learnt that the fire started as a result of power surge from one of the generating sets.
Sources said that immediately the church members noticed the fire, they tried putting it off with their in-house extinguishers.
However, the fire escalated and spread to the church main auditorium.
The church management declined speaking on the incident.
An eyewitness, Oladele Akintayo, said: “Before the arrival of the emergency teams, several property had been destroyed by the raging inferno.”
The General Manager of Lagos State Emergency Agency, Dr. Femi Oke Osanyintolu, and the Director of Fire Service, Rasaq Fadipe, said that the fire raged for about three hours before it was finally put out by the combined team of the emergency agencies at the scene.
Oke Osanyintolu said: “There is no casualty, but one of the fire service men sustained injury. The church lost a number of power generating sets and other property.”
According to Fadipe: “It was a very serious fire outbreak. The fire involved the generator house. A lot of armoured cables were also affected by the inferno. They have about 14 big generators that were affected and the church’s stationary diesel and petrol tanks.
“However, with the effort of the fire service officials, we didn’t allow the tanks to burst. And we also prevented the fire from spreading to the air conditioner house.”
He blamed the church for the extent of damage, saying: “When my men arrived the scene, they were restricted by the church members who wanted to take over the affairs of putting off the fire.
“I had four fire trucks on ground from Ilupeju, Isolo, Ikeja and Alausa with 10,000 tones of water each and 18 factory-fitted generating sets to combat the inferno.
“The fire involved the power house and the warehouse, where compressors were stocked. We faced serious interference from the church members.”
Vanguard.