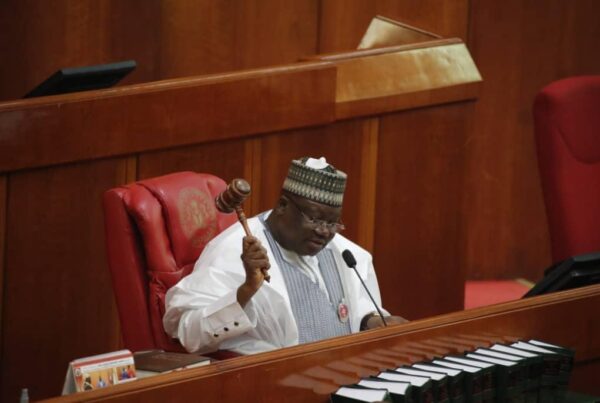 The President of the Senate, Ahmad Lawan, on Wednesday swore in Stephen Odey as the representative of Cross River North Senatorial District in the National Assembly.

The oath of office was administered at exactly 11:45am by the Clerk of Senate, Dauda Ibrahim El-Ladan, immediately after the Senate rose from a closed session to commence plenary.

With Odey sworn in, the number of Peoples Democratic Party Senators now stands at 46, while the All Progressives Congress, retains majority status with 63 members.

Recall Odey’s swearing in was put on hold on Tuesday following a court order by the Federal High Court stopping same.

In a suit, NO: FCT/HC/BW/M/633/2020, and before Justice O.A. Musa of the High Court of FCT in Abuja Judicial Division, the member representing Ogoja/Yala Federal Constituency, Jarigbe Agom Jarighe, through his counsel, Everestus U Chinedum, had prayed the court for an order of interim injunction restraining the Independent National Electoral Commission from issuing a Certificate of Return or swearing-in by way of admittance of Odey or any other person in his stead as the representative of Cross River North Senatorial District pending the hearing and determination of the substantive motion on notice.

The case is between Jarigbe and INEC, Clerk of the National Assembly, Senate President and Chief John Alagha.

INEC had on December 6 declared Odey as the winner of the December 5 by-election held at Ogoja for the northern senatorial zone, having polled 129,207 votes to defeat the candidate of the All Progressives Congress, Joe Agi (SAN), who scored 19,165 votes to place second.