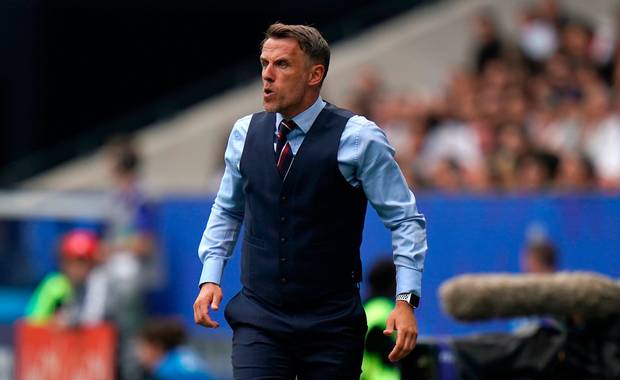 England manager, Phil Neville, has criticised the United States Soccer Federation for breaching etiquette by sending officials to the Lionesses’ hotel in Lyon.
The incident has come ahead of Tuesday’s FIFA Women’s World Cup semi-final match between England and the US.
American team staff visited the England hotel while Neville’s side were training on Sunday.
Reports had it that their aim was to assess the venue as possible accommodation if they beat England and reach the final.
“The only thing I will say is it’s not something I’d want my team doing. It’s not something that England will do,” Neville told a news conference.
He added: “We’re happy with our hotel and we were just training. So, I hope they’re enjoying their hotel. But it’s not something we’d do, send someone round to another team’s hotel.”
Normal etiquette in tournament football is for the two teams to stay in separate accommodation and it is highly unusual for officials to step inside the opposition’s hotel.
Neville suggested his US counterpart, Jill Ellis, would not have approved of the move.
“It’s their problem. I’m sure Jill won’t have been happy with that arrangement. I wouldn’t have been, if that was my team ops (operations) person going round and I’m sure she will be dealing with their own infrastructure with their own discipline.”
But in an earlier news conference, Ellis was asked if it was not “arrogant” for the US to be planning a move into England’s accommodation.
She was told it had been done with the presumption that they would win Tuesday’s game.
Ellis had however said it was simply prudent planning.
She said: “You have to plan ahead. Arrogance has nothing to do with us, that’s planning preparation for our staff. I think that’s pretty normal.”
Former Manchester United player, Neville, said the issue was mainly one of etiquette.
He added: “It’s not an unfair advantage; it has no bearing on the game. I actually found it quite funny.
“I just thought ‘what are they doing?’ It’s not etiquette. It’s not something I would allow from our Organisation.”