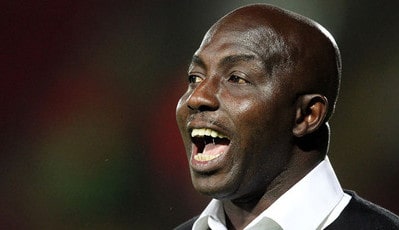 Former Green Eagles’ skipper, Chief Segun Odegbami, has pleaded with Nigerians to come to Samson Siasia’s aid as FIFA hammer dangles over the former senior national team gaffer.
Odegbami on Monday made this passionate appeal to Nigerians for the embattled coach to clear his name in alleged match-fixing claim by the world football governing body, FIFA.
In his piece, titled: “Samson Siasia does not deserve to be abandoned NOW!” the 1980 AFCON winner noted that he can hardly recognize “the present-day Nigeria from the country I was born into, grew up in, and served in my own little ways.
“Beyond politics, corruption and poor governance that have raped and left this abundantly rich and blessed country prostrate with poverty, hunger, disease, illiteracy, millions of jobless youths, ethnic crisis, kidnappings, senseless internecine killings, and more, I find that we have arrived at the final frontier, that point beyond which there can be no redemption –  our humanity. Where, when, how did we become such a completely dehumanized people without love and compassion for each other?
“Everything about the Nigerian could fail but not the spirit of community and concern for the weak, the afflicted, and the aged in society. Nigerians welcomed strangers with open arms, treated them without discrimination, like kings and queens, and provided for them an atmosphere where they could flourish even at the expense of their own people. That was the Nigeria of old.
“Suddenly those values are disappearing fast.
“I am forced again to write about Samson Siasia.
“I have done so twice in the past 6 months, drawing attention to the plight of a man who has been unjustly condemned by FIFA for a crime that some of us believe he never committed, and that FIFA has never taken the trouble to clearly state so that the world would know what he did (or did not do).
“Nigerians forget so quickly and easily who Samson Siasia is, and what he has done for Nigeria, and should never have been left alone at this period of his greatest challenge.
“FIFA passed a ‘death’ sentence on him, a life ban from the only activity he has always known throughout his life – football –  because he failed to respond to an email sent to him to come and defend himself in a scandalous matter of match fixing.
“Samson cried out to the world, (and many did not believe him) that he never saw the mail because he had not been using that particular email box for his correspondences for some time. True or not, the facts still remain that nothing categorical was ever traced to him resembling ‘match fixing’ – not a particular match, not a team, not a player(s).
“He had some contact with a man, as did a lot of people involved in one football business or the other, that was caught for fixing matches. Does that make everyone that knew him complicit? The man was a registered football agent that does various businesses in football with many people, teams, players, federations and coaches within the football circuit.
“The only way for Samson to defend himself was to lodge an appeal with the Court of Sports Arbitration, CAS. He could not raise the exorbitant cost before the deadline given. Through the effort of his lawyers, the matter was raised again with CAS, who now gave him a lifeline to defend himself, at a private sitting in CAS’s office in Switzerland, in the month of January.
“I have followed his case remotely, asked probing questions, and I now see that Nigeria, through its football authorities, has not been fair at all to the man that served the federation and country so diligently, and is facing a charge that reeks of injustice from one mile away. They could have investigated on their own and let Nigerians know what they think rather than just keep silent and allow their innocent servant rot in ‘jail’.
“If Samson was involved in match-fixing it makes sense to assume it must have been with one of the teams or players he was involved with – any of the three Nigerian national teams and the players in the teams. Those were the only teams he was involved with during his entire 12 years’ career as a national team coach.
“There is not one of the national teams, or one of the players that played under him throughout his career that has been named in any match-fixing charge.
“So, what match(es) did he fix, or was he only an accessory to fixing? How, where, when?
“You cannot separate him from a team, or players in alleging the offence he is purported to have committed. In this case, he has only ever coached Nigeria’s national teams where his records are impeccable and without blemish.
“The least the Nigerian government could do for him is request their Football Federation to conduct a quiet investigation of their own, and brief government before abandoning him to his fate.”
Siasia has until mid January 2020 to file his defence against the match-fixing claims before the Court of Arbitration for Sports.