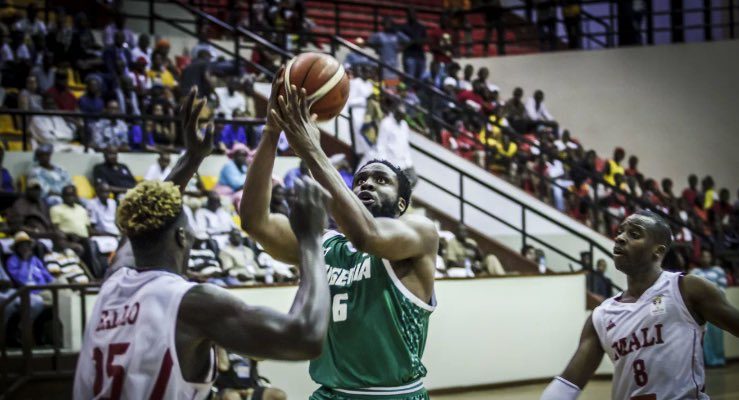 Nigeria’s D’Tigers have emerged undefeated in Group B of the African Qualifiers for the FIBA World Cup in China next year.
They capped it all by defeating the hosts, Mali, 82-59 in their last group match in Bamako on Sunday.
The News Agency of Nigeria reports that Nigeria earlier defeated Uganda on Friday and Rwanda on Saturday to remain unbeaten in the group in the first phase of the African Qualifiers.
D’Tigers will return to action in late June.
During the match against Mali, D’Tigers were aggressive against their host by scoring 21 points against 5 points at the end of first quarter.
Both sides picked additional 16 points at the end of second quarter, while Mali managed to pick 21 points against D’Tigers 20 points at the end of third quarter.
During the match, Captain Ike Diogu netted 22 points, nine rebounds and one assist for D’Tigers to ensure victory against their hosts.
Obi Emegano made 15 points, while Bryant Mbamalu had 14 points.
Even as Malian fans may have been disappointed at the end of the match, Samba Balayera supported by other Malian players attempted to salvage the situation.
Balayera scored five points, made four rebounds, three assists and one steal.
Uganda, Mali, and Rwanda finished in the group with a 1-2 record each.
According to a report by FIBA, in Group D played in the Mozambican capital of Maputo, Senegal beat the hosts 60-52, while the Central African Republic denied Cote d’Ivoire 63-62 in overtime.
Senegal and Mozambique share the lead of the group with a 2-1 record each while CAR and Cote d’Ivoire closed the group’s first-leg with a 1-2 apiece.
Back in November 2017, African champions Tunisia defeated Cameroon, Chad and Guinea to stay perfect in Group A, while Angola got the better of Democratic Republic of Congo, Egypt and Morocco in Group C.
The third window of the FIBA Basketball World Cup 2019 African Qualifiers returns in late June, early July for the second-leg of Group A (Tunisia), B (yet to be confirmed), C (Egypt) and D (Senegal).
At stake in the African Qualifiers are five tickets on offer for the continent’s countries to reach the first-ever 32-team FIBA Basketball World Cup taking place in China from August 30 to September 15, 2019.