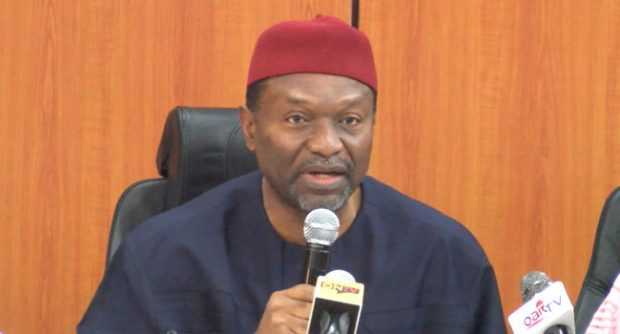 The Minister of Budget and National Planning, Senator Udoma Udo Udoma, says Nigeria’s priority is to create a better environment for businesses to thrive in the country.
Udoma said this in a statement by his Special Adviser on Media, Akpandem James, on Tuesday in Abuja.
The minister said this when he received the delegation of French businessmen, accompanied by the French Ambassador to Nigeria, Denys Gauer.
A 30-man delegation, comprising investors in the oil and gas, energy, manufacturing, banking and logistics sectors, came to Nigeria to explore possible areas of investment.
Udoma said Nigeria had also focused on expanding the productive base of the economy, adding that the country was always open for business.
Udoma, however, appreciated the increasing interest in Nigeria by both domestic and foreign investors.
He assured that the government was determined to continue with the various initiatives to improve the business climate as set out in the Economic Recovery and Growth Plan.
He said as a way of monitoring the progress of the country’s reforms, government set a target of moving 20 places up in 2017 on the World Bank Ease-of-Doing-Business rankings.
He said: “We are happy to report that in the World Bank’s latest rankings, released in October 2017, the country moved up 24 places – a remarkable achievement.
“Nigeria has also been recognised as one of the 10 top reforming countries in the world.”
Udoma told his guest that a lot of opportunities existed for investment, especially in agriculture, manufacturing, oil and gas, power, rail, mining and shipping, among others.
He explained that the fall in crude oil price experienced at the inception of the administration was a wake-up call for the diversification of the country’s economy.
Udoma said: “The government’s response to this was the development of an ambitious four-year plan to dramatically turn around the economic direction of the country.
“This Plan – ERGP – is aimed at increasing the productivity of the Nigerian economy by encouraging private sector investment.”
He told the delegation that the government was committed to achieving the objectives of the plan and getting the economy back on the path of diversified, sustained and inclusive growth.
The minister also encouraged the delegation to participate in the Malaysian style labs, one of the strategies being adopted by government to speedily achieve some of the core objectives of the plan.
He said the aim of the focused labs was to increase both local and foreign direct investments which would ultimately translate to more jobs.
In addition, Udoma invited the delegation to key into the ERGP to invest in Nigeria and take advantage of the opportunities that the country currently had.
Earlier, the leader of the French delegation, Movement des Enterprises de France, Philippe Lebonne, said that MEDEF was the largest French Business Confederation and the largest employer of labour in France.
Lebonne said that MEDEF had an estimate of 750,000 firms, 90 per cent of which was made up of small and medium scale enterprises.
He assured the minister that his country had come, prepared to key into the Federal Government’s agenda as set out in the ERGP.