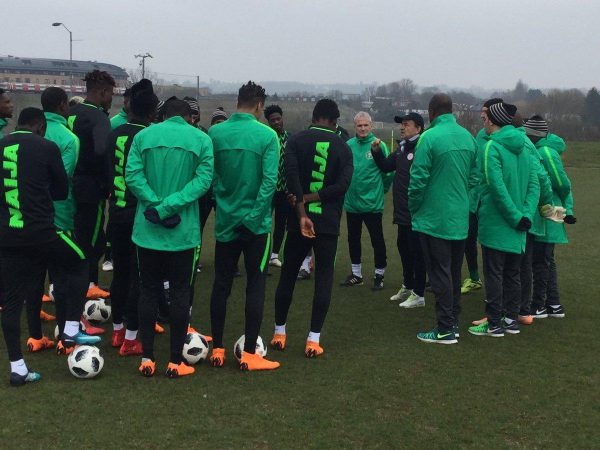 The Federal Government has charged the Super Eagles and Super Falcons to go all out to make Nigeria proud at the AFCON and FIFA Women World Cup respectively.
Olusade Adesola, Permanent Secretary, Ministry of Youths and Sports Development, said this on Friday in Abuja when organisers of Miss Football Nigeria, an NGO paid him a courtesy visit.
He commended the Falcons for qualifying for the knock-out stage of the 2019 FIFA World Cup in France despite all odds and stressed the need for them to re-double efforts in their next game against Germany.
He said the Federal Government would continue to support them while reiterating the need for them to be dedicated and patriotic.
He said: “The Super Falcons are out there in France sweating it out and trying to bring glory to Nigeria.
“We were delighted when they eventually qualified yesterday (Thursday) for the next round and we wish them success.”
The permanent secretary also tasked the Super Eagles to be at their best as the 2019 AFCON begins in Egypt on Friday.
He added: “We also wish the Super Eagles success at the AFCON, there is no short cut to hard work so they must be at their best to make us proud.”
He assured that the Federal Government was working hard to ensure that all funds needed for their success were released as at when due.
Adesola said the ministry would continue to work with relevant stakeholders to developing sports in the country.
Earlier, Director-General, Football Nigeria, Moses Ebahor, said the visit was meant to honour the permanent secretary as the Grand Patron of Miss Football Nigeria.
He also used the occasion to call for the participation of more girls and women in sports in the country.
The News Agency of Nigeria reports that 2019 AFCON begins on Friday in Egypt. The Super Eagles of Nigeria will take on debutants Burundi in a crunchy tie on Saturday.