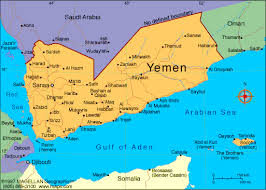 The Federal Government is making arrangments to evacuate Nigerians from conflict-torn Yemen, the News Agency of Nigeria reports.

A source in the Ministry of Foreign Affairs told NAN in Abuja on Friday that no fewer than 46 Nigerians had already been identified in Yemen.

The source, who preferred anonymity, said the Nigerian government had been in constant touch with the Nigerian Mission in Saudi Arabia for the implementation of the plan.

According to the source, the delay in the evacuation was because Nigeria did not have a mission in Yemen.

The source said: “Nigeria is evacuating its citizens in Yemen and a list of Nigerians in the country has already been compiled.

“The first list has no fewer than 46 Nigerians identified to be resident in the country.

“Already, the Nigerian Mission in Saudi Arabia is coordinating the evacuation.

“Nigeria does not have a Mission in Yemen but Nigeria’s mission in Saudi Arabia is coordinating the evacuation.”

The source said Nigeria was committed to safeguarding the lives of its citizens wherever they are in the world.

NAN reports that governments of several countries, including Germany, France, Russia, India, Egypt and Somalia, have sent ships to transport their citizens home from Yemen.

However, the US has said there were no immediate plans to evacuate its citizens from Yemen.

The US State Department’s website states: “There are no plans for a U.S. government-coordinated evacuation of U.S. citizens at this time.

“We encourage all U.S. citizens to shelter in a secure location until they are able to depart safely.”

In mid-February, the U.S. government closed its embassies in Yemen and evacuated its personnel.

Last month, all Yemen’s airports shut down operations amidst heavy fighting, making it nearly impossible to leave the Gulf state by air.

Since March, a Saudi-led coalition has been launching airstrikes against Houthi targets in Yemen as part of the campaign to restore the government of fleeing Abd-Rabbu Hadi.