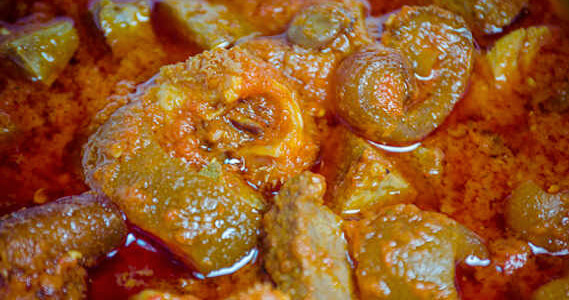 The Federal Government may have concluded plans to ban sale and widespread consumption of hides and skins, popularly known as ponmo, which is a delicacy to most Nigerians.
This indication emerged on Tuesday when the Minister of Agriculture and Rural Development, Dr. Akinwunmi Adesina, called for competent regulations that would check the consumption and sale of the product.
Adesina said this at the third joint anniversary of the Animal Science Association of Nigeria and the Nigeria Institute of Animal Science held at the University of Ibadan.
If this is achieved, he noted that livestock farmers would stand good chances of making high dollar return if the hides and skins are tanned into leather.
The minister, who was represented at the occasion by the Director of Animal Production and Husbandry in the Ministry, Dr. Ademola Raji, said: “I also commend NIAS for its advocacy and public enlightenment programmes on radio and television that promote value addition in livestock as against sale and consumption of primary products alone, particularly with the issue of curtailing the widespread consumption of hides and skins, known as ponmo, which ought to be tanned into leather for a very high dollar return to the farmer and tanneries.
“I expect that competent regulations acceptable by all stakeholders will be developed so as to give credibility that our set standards for food safety are being implemented, which will boost value addition.”
The theme of the programme was: “Value Addition in the Nigerian Livestock Industry: A strategy for Economic Growth and Stakeholders Empowerment.”
Adesina stressed that the FG would continue to drive its Agricultural Transformation Agenda with increased vigour in all its ramifications, pleading for continuous support and cooperation of all stakeholders in the livestock sector to deliver the benefits.
He said: “I am confident that the satisfactory production levels achieved in the poultry and swine segments will soon stretch to reach other commodities such as beef, dairy, micro livestock and animal by products such as leather, bones, hides and skins.
“The drive to turn Agriculture into business and not merely a way of life is now in full gear, with the use of mobile phones and e-wallet for input distribution directly to farmers, farmer’s registration with biometric identity cards and the Growth Enhancement Support scheme.
“We have all seen the revolution in rice production and processing; in cassava, sorghum and cotton that have increased output per hectare, through the supply of high quality raw materials to revive industries that have hitherto closed down.”
Food production, Adesina said, rose in 2013 by eight million metric tonnes over 2012 figures, which represents over 70 per cent growth of the target set for 2015 by the government.
“In 2012, 264,000 hectares of dry season paddy rice cultivated in the Northern states alone yielded 1.1 million metric tonnes,” he added.
Speaking earlier, the NIAS President, Prof. Placid Njoku, applauded the Federal Government for tackling the deadly Ebola Virus Disease, noting that the institute would encourage its members to undertake visionary studies aimed at producing popular bush meat in the country in “intensive, hygienic and Ebola disease free environment”.
Vanguard.