by The Eagle Online
in News
1 min read
0

My message to you on Children’s Day, by Timi Alaibe

This he said was to enhance road transportation network in the country.

Osinbajo stated this at the inauguration of the Damboa dual carriage way, constructed by Borno Government.

He disclosed that the federal government was also committed to the construction of major trunks, highways and access roads in rural communities. 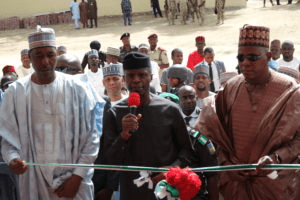 According to him, part of the mandate of the North East Development Commision was to reconstruct and rehabilitate critical infrastructure such as roads damaged by the Boko Haram insurgents.

Osinbajo commended Governor Kashim Shettima over his developmental strides designed to fast track sustainable social and economic growth and development of the state.

The News Agency of Nigeria reports that Osinbajo inaugurated other projects such as schools, remodelled housing estate and a mechanics village in Maiduguri metropolis, as part of his one-day visit to the state.

My message to you on Children’s Day, by Timi Alaibe

FG to Bash Ali: We’ll have nothing to do with your fight