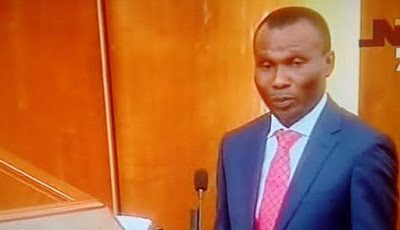 The Minister of Niger Delta Affairs, Pastor Usani Uguru Usani, says the Federal Government remains committed to achieving permanent peace in Niger Delta.
The Minister said this in an interview with the News Agency of Nigeria in Abuja on Thursday.
Usani said this singular objective was the greatest desire of the current administration of President Muhammadu Buhari.
He said: “Peace is a prerequisite for development.
“We once again plead with all stakeholders to give peace a chance”, Usani said.
The minister reiterated the resolve of the current administration to develop the Niger Delta.
Usani said the ministry would embark on a flurry of infrastructure development that would change the Niger Delta as soon as government succeeded in achieving peace in the area.
He urged the indigenes of the region to create a suitable environment that will ensure appreciable recovery of the lost years.
Usani decried the grotesque image of militancy now ascribed to the region.
He said the All Progressives Congress government and the Niger Delta Ministry were more than ever determined to deliver on campaign promises.
The minister said beginning with the staff of the ministry, the focus was now on ethical values and hard work to achieve the set objective of the ministry.
He said the ministry was working in collaboration with the Ministry of the Environment and international agencies on the best way to reach the rural population and mitigate pollution of the environment.
Usani said: “In collaboration with the Bank of Agriculture, the ministry has in the past six months issued N130 million as loans for capacity building to rural dwellers and farmers.
“The scheme is under extension monitoring and the bank’s supervision in conjunction with the ministry’s monitoring unit.”
The minister dismissed the recent call by a group for the sack of some ministers over alleged non-performance “as an idle talk meant to distract the APC from achieving its change agenda”.
NAN.