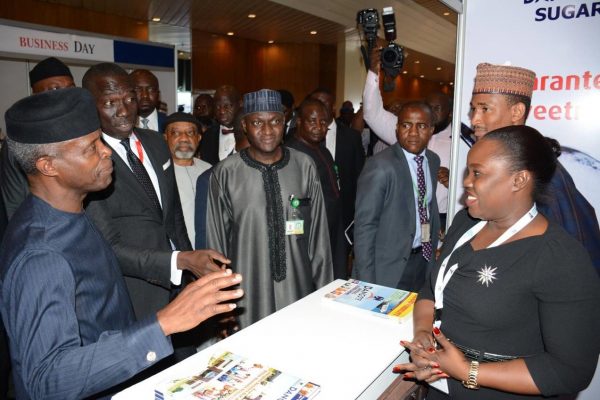 Share
Facebook Twitter LinkedIn Pinterest Email
The Federal Government has lauded the complementary roles being played by the largest indigenous conglomerate in the country, the Dangote Industries Limited, in the transformation of Nigeria’s economy, saying the company deserved to be encouraged.
The Vice-President, Prof. Yemi Osinbajo, gave the commendation on Monday during the opening of the 24th Nigeria Economic Summit in Abuja.
Osinbajo said the company had proved a worthy partner in government’s effort at diversifying and revitalizing the economy, especially through its backward integration in cement and sugar.
He stated that the government is very proud of the management of Dangote Industries Limited and aligned itself with the Dangote brand as it adds value to Nigeria’s economy.
He said: “We align with Dangote as a brand.
“Its uniqueness, acceptability and popularity is second to none and the brand has shored up activities in the nation’s industrial sector.”
The Vice-President, who led the leadership of the NESG and top government officials to the Dangote booth at the NESG Summit, said he could confirm that Dangote is a value adding entity.
He said: “The management has been up and doing.
“Everyone knows Dangote products.”
It would be recalled that the company was voted as the best brand among 50 leading brands in Nigeria recently by the Brand Nigeria, a brand rating agency.
Recently, women entrepreneurs in Abuja at a gathering convened by the American Centre rated Dangote brand as the leading brand in Africa and described the company as a true indigenous band, which model they would aspire to copy to grow their businesses.
Earlier, Vice President Osinbajo decried the grand corruption bedeviling the country as cankerworm that is draining the country’s resources and depriving majority of the people of meaningful development.
Declaring open the 24th Nigerian Economic Summit, NES#24, Osinbajo said the push for zero tolerance in corruption and rule of law and effective public institutions are unfinished business of reforms that Government must re-focus attention.
The present systemic corruption, he maintained, has relegated progress and achievements of the present administration so much that it would seem not much has been done to eliminate poverty in the land.
The Vice-President said poor investment in infrastructure, lack of commitment to diversification of the economy, inability of States to pay salaries without the intervention of the Federal Government and low investments in the informal sector were some of the challenges of Governance.
He called for more collaboration among the NESG, the private sector and government to move Nigerians from poverty to prosperity as the Buhari Administration through its policies and programmes strives to reverse the trend.
He said: “Government has made tremendous progress in the economy through its strategic plan, ERGP, to provide sustainable economic opportunities for growth that will end the vicious cycle of poverty in Nigeria.
“In agriculture, for instance, the success story is fertilizer programmes have improved local blending, there is increased rice production, wheat, groundnut and our Social investment drive has empowered the youth and women.
“Other strategies have been part of our approach to reverse the trend.”
The Minister for Budget and National Planning, Senator Udoma Udo Udoma, commended the Federal Government for taking necessary measures to exit from recession and sustain the growth of the economy.
Udoma said the ERGP’s top priority was regular collaboration with the private sector to ascertain growth in the vital sectors and move Nigeria forward.
The NESG said that over the years, Nigeria has struggled to create a business environment that is globally competitive and able to drive investment in key sectors of the economy, but this had resulted in the dearth of economic development and limited growth dividends to a rapidly increasing population.
Post Views: 0
Dangote Industries Limited Federal Government NESG Udoma Udo Udoma Yemi Osinbajo
Share. Facebook Twitter Pinterest LinkedIn Tumblr Email