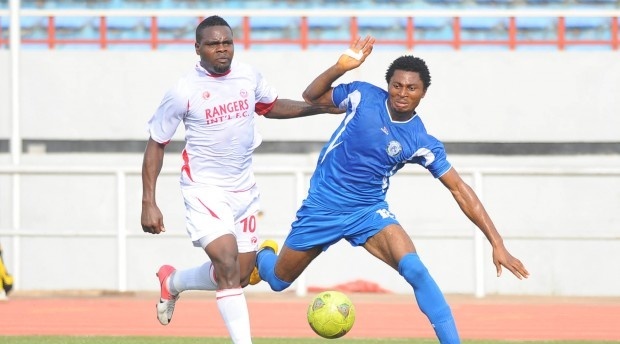 Rangers International Football Club of Enugu on Friday in Abuja beat Akure City FC of Akure 2-0 in a Round of 64 match of the 2016 Federation Cup competition.
The News Agency of Nigeria reports that the match, played at the Area 3 Football Pitch, saw both sides struggling to outshine each other and take control of the game.
Bobby Clement did not allow his 8th minute booking to deter him as he went on to score in the 15th minute, after a beautiful pass by Amanfor Chimezie.
The game continued with no goals from both teams, except a yellow card to Djehani Nguissan, the Rangers’ team captain, for dissent just before the break.
All efforts by both teams to score in the second half proved abortive until Obinna Nwobodo extended Rangers’ lead in the 75th minute.
Coach Adepoju Banjo of Akure City FC told NAN after the match that his team had gained some exposure by playing a better team.
Banjo said: “I really appreciate God for this hitch-free match and I am happy my boys have been exposed to playing a better team.
“Even though we lost the match, I know my boys played well.
“Unfortunately, they did not translate opportunities into goals.
“Definitely, we played a better side today and that is why we lost the match.
“But we will go back and work on the weaknesses I have observed.”
On his part, Imama Amapakabo, the Rangers coach, told NAN he was happy with the result of the match and commended Akure City FC for a good outing.
Amapakabo said: “It was a good match and our opponents played well.
“Akure City FC is growing and they will definitely go places.”
He however cast his sights at what laid ahead for his team immediately.
He said: “We still have one outstanding match, an NPFL match, with El-Kanemi Warriors on Wednesday.
“We will work hard to win that match also by the Grace of God.”
NAN.