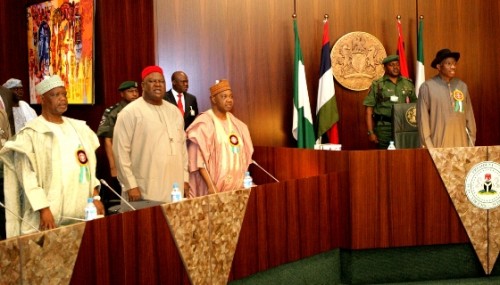 The Federal Executive Council on Wednesday approved a loan of $100 million (about N15.7 billion) from Indian Import Export Bank to boost power supply in three states.
Dr. Yerima Ngama, the Minister of State for Finance, disclosed this after the council meeting, presided over by Vice President Namadi Sambo.
Ngama said that the loan, to be taken by the Federal Government, would be lent to Cross River, Enugu and Kaduna States.
Specifically, Ngama said that $30 million (about N465 million) would be given to Cross River State for the development of the Calabar independent Power Project.
He said that Enugu State Government would get $40 million (about N620 million) for the electrification of 96 communities.
The minister said the loan would be used for the installation of 33KVA and 15KVA lines as well as the distribution of transformers and other accessories to the 96 communities in the three senatorial zones of the state.
He said that $30 million will be given to Kaduna State Government to augment the resources needed for the construction of the 70km transmission line from the Gurara Dam to Kaduna industrial area.
Ngama said the fund would also be used for the construction of 132KVA and 33KVA sub-stations for power supply to the Kaduna industrial area.
He added that 50 communities in the state would also benefit from solar electricity project.
The minister said that the facility, which is coming at a concessionary rate, was taken at two per cent interest rate to be repaid over a 10-year period, with three years moratorium.
He added that there would be a commitment charge of 0.5 per cent of undrawn balance and 0.5 per cent for service charge.
Ngama said that the facility had been approved by both the National Assembly in the Medium Term borrowing plan and by the benefiting state houses of assembly.
“We believe that this facility will go a long way towards transforming our industrial areas and other communities as part of Mr. President’s commitment to economic transformation agenda,” he said.
Ngama said that the country would not be plunged into the era of huge foreign debt with high servicing rate.
He said that the ratio of debt to GDP was just slightly less than 20 per cent and that the loans taken by government were geared towards the development of infrastructural facilities.
The minister explained that the credit facilities being taken by the administration were different from the previous loans that led to the pile-up of huge foreign debt.
He said: “Preponderant of commercial credits led to high interest rates, making Nigeria to pay over $40 billion for debt servicing.
“Under the current regime, government is getting development loans also known as multilateral and bilateral assistance.”
Ngama said that domestic debts put at about N600 trillion was of greater concern to government.
He said the reason for the high domestic debt was because of high interest rate charged by local banks, which he put as about 19 per cent.
The minister said that because of the high interest rate on domestic loan it was preferable to go for concessionary foreign loans.