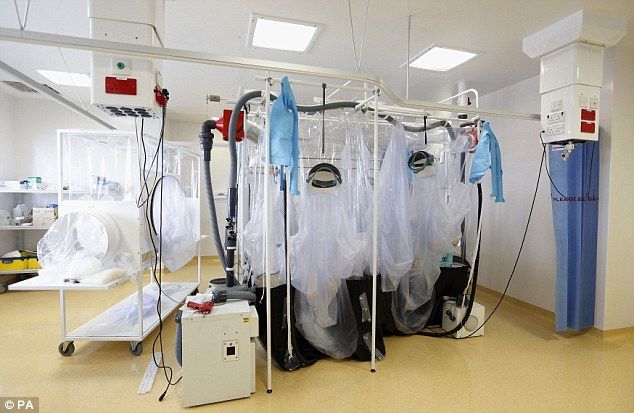 A leading academic has warned that university students could be at risk from the deadly Ebola virus – because 21,000 students from countries in the affected region are about to arrive in the UK.

Anthony Glees, the Professor of Politics at Buckingham University, called for West African students to be held in their home countries until they have been declared clear of Ebola and the 21-day incubation period has passed.

His comments came as Sierra Leone announced that it was introducing a four-day ‘lockdown’ to try to prevent the out-of-control epidemic from spreading further. People in the west African country will not be allowed to leave their homes from September 18 to 21.

The disease spreads through contact with infected blood, bodily fluids or contaminated environments and has killed more than 2,100 in Sierra Leone, Liberia, Guinea and Nigeria in recent months.

Symptoms include fever, bleeding and damage to the central nervous system, and the current outbreak has a mortality rate of 55 per cent.

Professor Glees accused the Government and universities of ‘extreme complacency’ over the issue. ‘This plague is on the rampage,’ he said.

‘What no one seems to realise is that we are potentially at grave risk from any one of the 21,000 students from West African states who are going to arrive in the UK over the next fortnight.

‘Students from affected countries could develop symptoms up to three weeks after arrival. Even where they have been screened before departing they may be sick. We should consider preventing them coming to the UK for 21 days so we can be sure they are not sick.’

He suggested that ‘cash-strapped’ universities regarding overseas students as ‘a vital source of income’ were turning a blind eye to the risk.

Last month Universities UK, the governing authority for the country’s 136 universities, issued advice to campuses saying that the risk of infection was ‘very low’.

If a suspected case emerged, the patient should be immediately isolated – and looked after by staff equipped with ‘surgical gloves, plastic aprons, plastic visors and surgical facemasks’.

But Professor Glees said: ‘No university has this kind of kit to hand unless they have medical schools. Many universities are in smaller towns and do not have the facilities of larger cities such as London. Students are not only obliged to share toilet and shower facilities, but exchanging bodily fluids is something they do with great frequency.

‘I am appalled by the total lack of practical advice, training or equipment for those working in universities who may come into contact with infected students.’

However, last night Dr Ben Neuman, a virology expert at Reading University who teaches students from West Africa, said: ‘The screening system at airports means that the numbers of infected patients potentially reaching the UK is tiny. Universities who think they have a case on their hands would refer it immediately to hospital.’