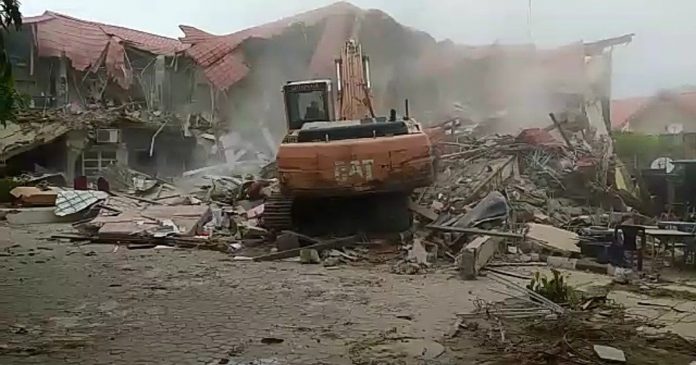 The Federal Capital Territory Administration through its Department of Development Control has demolished the controversial Caramelo Lounge, a popular strip club for allegedly contravening the FCT land use regulations.

This was disclosed by the Abuja Metropolitan Management Council Coordinator, Umar Shuaibu, while briefing newsmen on the exercise on Monday in Abuja.

Umar said in spite serving of quit notice and contravention letters to the operators of the club since 2016, they failed to revert activities on the plot located at No 630, TOS Benson Crescent, Utako District, Abuja.

He noted that the plot was originally approved for building of a clinic to provide healthcare services for residents of the territory.

The coordinator said the action followed the approval of the FCT Minister, Malam Muhammad Bello, for the revocation of the Certificate of Occupancy on May 10.

He said activities of the club contravened the provisions of Clause no. 10 of Certificate of Occupancy and Clause 10 of the conveyance letter of building plan.

Umar said there were complaints of noise pollution, insecurity and social disturbances written to AMMC by those in the neighbourhood and the Department of State Services on the negative impacts from the premises.

He said: “The issue assumed a critical relevance not only because change of use is inimical to provisions of the Abuja Master Plan, but it has equally generated externalities.

“This culminates into noise pollution, on-street parking, insecurity, social vices and many others.

“For the purpose of clarity, the land use provision designated to accommodate lounge/night club activities is within a hotel plot.

“As the gentlemen of the press are already aware, we have night clubs operating in hotels like Hilton, Sheraton and other notable hotels within the city.”

Meanwhile, a source around the lounge told the News Agency of Nigeria that DDC staff, bulldozers with a joint team of security personnel stormed the sites at 7am on Sunday and pulled down the one-storey building.

NAN also learnt that the demolition exercise was sequel to a 48-hour final demolition notice after the issuance of a revocation letter to the operators by the Department of Lands Administration of the FCTA.

It was also learnt that on April 17, a joint task team of AMMC involving DDC, Abuja Environment Protection Board, Social Development Secretariat raided Caramelo and Ibiza clubs among others.

They arrested several nude dancers, who were handed over to the Nigeria Police for prosecution in line with extant laws in the FCT.

The FCTA also gave a two-week ultimatum to Ibiza Club situated on plot 686 & 687 Cadastral Zone A03, Garki II District to revert to the designated use or risk appropriate sanctions.

Reacting to the development, Managing Director of Caramelo Lounge, Max Eze, expressed dismay over the removal exercise as they were taken aback by the short notice given to them to vacate the property.

Eze, who subtly admitted to the conversion of the original land use, however, said the management of the lounge had been paying millions of naira as annual contravention fee to the government.

According to him, the worth of the property demolished is over N100 million, while about 100 staff are now rendered jobless.