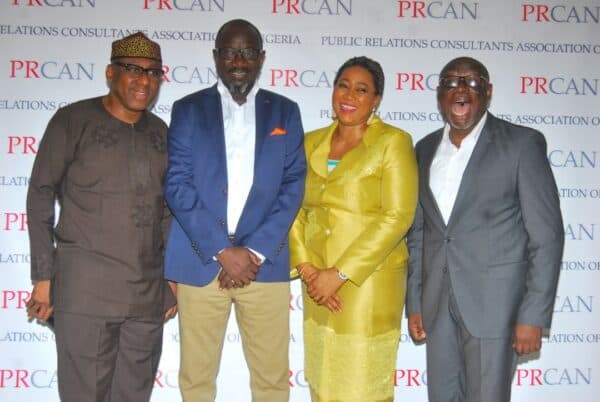 The newly-elected President of the Public Relations Consultants’ Association of Nigeria, Israel Jaiye Opayemi, has offered the professional body’s assistance to the Federal Government in improving Nigeria’s battered image on the international scene.
Opayemi offered the assistance in his inaugural address at the PRCAN 2019 Annual General Meeting during which he and other new executives of the association were elected in Lagos on September 6.
Other members of the executives who will be steering the affairs of PRCAN over the next two years are Adedayo Ojo (Vice President); Tokunbo George-Taylor (Secretary General); Martha Okpeke (Assistant Secretary General); Bolaji Abimbola (Publicity Secretary); and Raheem Olabode (Treasurer).
Speaking in the wake of the recent grand jury indictment of 77 Nigerians for alleged involvement in online fraud schemes in the United States, Opayemi said what was needed was a robust response strategy and campaign plan, not knee-jerk reactions from several government spokespersons.
The new PRCAN President explained that the FBI investigation and subsequent indictment has further sullied Nigeria’s brand reputation and that the association was in the best position to help.
Opayemi said: “The truth is, a narrative has been created about us as Nigerians. A wrong perception with its attendant generalisation has also been created. Not a few Nigerians have cancelled their planned trips to the United States for fear of the horrible treatment they will be subjected to by the United States Immigration. The PRCAN leadership takes the view that rather than engage in the needless game of blaming the government for the character of its response to this issue, we on this occasion offer the professional assistance of our member-firms to the Federal Government at a time like this.
“In times like this, governments the world over would rely on the professional advice and expertise of practitioners who are not in any short supply within the Nigerian Public Relations community to help craft a response strategy and a campaign plan to manage the narrative and shape the perception. This has not been the case here.
“The situation at hand does not call for hasty rebuttal press releases. This is not a time for too many government officials to be speaking on this vexatious subject. This requires a strategy! This is what our members can offer the Nigerian government at a time like this. We missed the timing to tell the story of the rare exceptionalism of our people, but we must never miss this opportunity.”
The new President, who is also Managing Director/Chief Strategist, Chain Reactions Nigeria, advised President Muhammadu Buhari and Vice President Yemi Osinbajo that it was time to tell the authentic Nigerian story and to let the world know that we are not all fraudsters as Nigerians citizens are being erroneously portrayed.
He said: “It is incumbent on us to tell the world, that the reality of our case is that, it is #NotAllOfUs. Not all of us are fraudsters. This is the country of origin of Aliko Dangote, Dr. Mike Adenuga, Femi Otedola, Wale Tinubu, Anthony Joshua, Professor Wole Soyinka and Chimamanda Adichie. Let us remind the world that the immortal Chinua Achebe was from amongst us. This is the time to remind the world that this is the country of Ayodeji Balogun aka Whizkid and Innocent Idibia aka Tuface Idibia.
“This is the time to tell the world that this is the land that produced legendary Olu Jacobs and Pete Edochie. Never must the world forget that Genevieve Nnaji and Omotola Jalade-Ekeinde of Nollywood; Alex Iwobi of Everton, Wilfred Ndidi of Leicester City, Victor Osimhem of Lille are from this great nation. Let us remind them that this is the country of origin of Texas-based Dr. Oluyinka Olutoye, who shocked the world with a rare surgical feat by operating on an unborn child who had tumour right from the womb. Dr. Olutoye removed the tumour, restored the foetus to the mother’s womb. He exemplifies the story of our exceptionalism.”
Earlier in his valedictory speech, the immediate past President of PRCAN, John Ehiguese, highlighted quackery and non-compliance with set standards as top among the challenges faced by the PR industry in Nigeria, stating that the onus is on PR professionals to come together to stem the tide.
He stated that during his tenure, the leadership fostered a better relationship with the national body, NIPR; raised industry compliance and enforcement; secured the re-admission of PRCAN into the membership of International Communications Consultancy Organisation (ICCO), ensured regular hosting of the PRCAN MasterClass series, PRCAN Breakfast Meetings as well as the PRCAN Gold Medal Lectures amongst others.