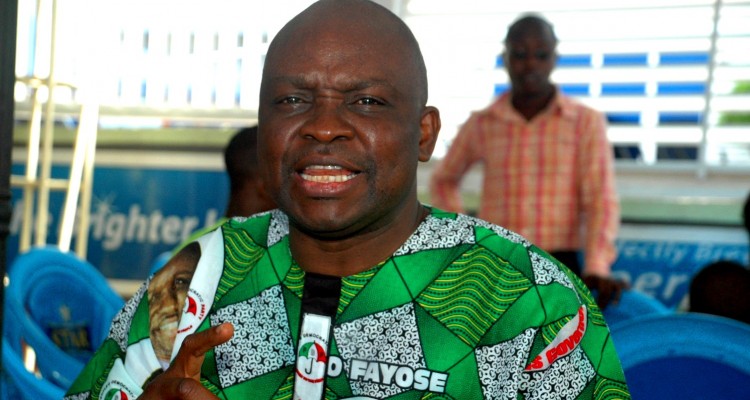 Following entreaties by the Ewi of Ado-Ekiti, Oba Rufus Adejugbe Aladesanmi 111; foremost lawyer, Aare Afe Babalola (SAN); the Catholic Bishop of Ekiti, Right Revd. Felix Ajakaye; and other prominent indigenes of Ekiti State, the Ekiti State Governor, Ayodele Fayose, has lifted the suspension placed on the Secretary to the State Government, Dr. Modupe Alade.
The personalities pleaded on behalf of the SSG during the celebration of the 25th coronation anniversary of Oba Adejugbe Aladesanmi in Ado-Ekiti on Saturday.
The SSG, who was suspended some days ago for three months by the governor, has therefore been pardoned and asked to resume office on Monday.
Setting the tone for seeking pardon for theAlade, Oba Adejugbe said his joy on the occasion would not be complete if the governor does not accede to the demand.
In his response, the governor said he had no choice other than to defer to the eminent personalities but warned against indiscipline on the part of public officers and civil servants.
He noted that though he is a kindhearted governor, he would not compromise discipline.
Babalola, who was the chairman of the occasion, had listed the qualities that made Fayose excel as a governor.
He said: “He is kind and listens to advice and wise counsel.
“He does not say he is the governor and would lord it over everybody.
“When the tipper drivers had issues with him over the N1,000 levy, the drivers came to me to intervene and I called the governor on the phone.
“Though he was in Afao-Ekiti, he came down to Ado-Ekiti and he heeded my plea on behalf of the drivers and reduced the levy to N500.”
Babalola described Fayose as a realistic and pragmatic person, who has brought that to governance.
He said with the dwindling revenue base of the government at all tiers, those in leadership positions have to put in extra efforts to meet the yearning and aspirations of the people.
He said: “Thank God that we have a governor that is realistic and pragmatic.
“When he says yes it yes and when he says no it is no.
“We have a governor that is truthful, honest and transparent and that has been helping us in the state.
“It has also manifested in the recent award given the state government.
“We have 36 states in the federation and a survey was conducted on budgetary implementation and the Fayose government was rated as the most transparent in the country.
“Those states that call themselves big rated low on the scale.
“This shows that the governor has been handling the affairs of the state well.”
Babalola, who is also the founder of the Afe Babalola University, Ado-Ekiti, called on the people to return to the farm, saying agriculture was the surest way out of unemployment and poor revenue in the country.
In his speech, Fayose, who was the guest of honour, promised to attend any similar event organised in honour any traditional ruler in the state.
He said: “The governor is for all traditional rulers and people of the state.
“I want to assure our royal fathers that occasion like this is not limited to Ado as many of our royal fathers having such a great event like this, the governor is at your beck and call.
“Ado is central to us as a state and I am for all royal fathers and any event that tells the history of your existence, I will always be part of it.
“I also promise that by God’s grace, the new Ojaba Market, if not completed by this time next year, will be near completion.”
In his remarks, Oba Adejugbe Aladesanmi 111 thanked Fayose for his tremendous efforts at developing Ado-Ekiti and the state at large.
He said: “Ado people cannot thank you, Governor Ayodele Fayose enough.
“You have helped us a great deal and we pray that God will continue to support and bless you.
“I thank you also for the pavilion here in the palace.
“It was through your great support and effort that it has been completed.
“I appeal to all Ado sons and daughters to support the administration.”
The monarch called on the people to show interest in the development of their town and state.