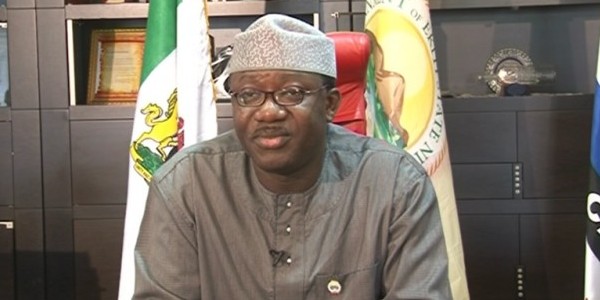 Governor of Ekiti State, Dr. Kayode Fayemi has called on the Federal Government and the National Assembly to begin the implementation of the report of the just concluded National Conference.

The Governor who made the call in Ado Ekiti on Wednesday while receiving reports of Ekiti Delegates at the confab said Nigeria has reached a critical point where citizens and government must act fast in order to prevent the looming danger that necessitated the national conference.

Dr. Fayemi while stressing the need for a referendum on the report expressed optimism that the report would yield positive results that will produce a new Nigeria that will give a new lease of life to Nigerians.

“I hope this will go beyond just another report as we have seen many ending up as mere reports but something tells me that we have reached a point of no return that we either do something about this or God help Nigeria. This calls for immediate attention of the National Assembly and Nigerians of the need for a referendum”, he said.

The Governor while commending the Ekiti delegates for giving the State quality representation at the confab, noted that many of the decisions taken at the conference were from the mandate given the State delegate by the people of the State at a mini-conference organized before commencement of the main national conference.

Fayemi highlighted such issues that were adopted from the position of Ekiti State to include fiscal federalism, devolution of power and gender equality among others.

Speaking on devolution, Governor Fayemi said there is no two-tier State which runs a three- tier government because local government should be the business of the State Government and not the Federal Government; adding that the Confab decision of this has strengthened his belief in fiscal federalism.

Earlier, the leader of the Delegation, Dr Kunle Olajide had commended Fayemi for painstakingly selecting the State Delegation which actually drove the conference in a positive direction, especially in the areas of gender and fiscal federalism.

Olajide expressed optimism that the federal government would have the political will to implement the report of the conference in order to make Nigeria a better place.

The two other delegates who came with Olajide were the Catholic Bishop of Ekiti Diocese, Most Revd Felix Ajakaye and Prof. Olabisi Aina and they as well spoke on issues ranging from gender to religion.