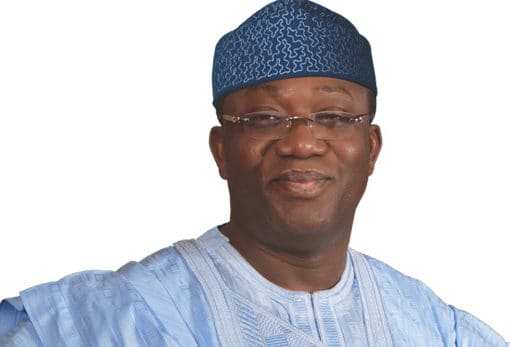 Ekiti State Governor, Dr Kayode Fayemi spoke glowingly of  the late Prof Francisca Aladejana, former Provost of the College of Education, Ikere- Ekiti, at her funeral mass held at the St Patrick’s Catholic cathedral, Ado Ekiti on Thursday. He described the deceased as a rare breed scholar and administrator who loved and served the state passionately.

Prof Aladejana aged 62 years, was until her death, the Special Adviser to the Governor on Basic, Secondary and Vocational Education. She had previously served as Chairperson of the State’s Universal Basic Education Board (SUBEB).

Dr Fayemi in his remarks, described the late Professor of Education as a woman of substance who was humble, brilliant, motherly and who dedicated and lived a sacrificial life of service to the people of Ekiti State.

Speaking glowingly of her contribution to the development of education in the state in particular, Dr Fayemi said Prof Aladejana would be remembered for repositioning the College of Education Ikere, (now Bamidele Olumilua University of Education, Science and Technology, Ikere (BOUESTI), and for raising the enrolment figure of primary school pupils by over 40,000 during her tenure as SUBEB Chairman.

The Governor stated that the only way to celebrate Prof Aladejana’s lifestyle was by living a life of service to others. He added that the late SUBEB boss lived her life in the service of her state in “a distinguished manner to the admiration of Ekiti people”.

“I really didn’t know her when I appointed her but she came highly recommended when we were looking for someone who would help revive the College of Education, Ikere. We first appointed her as Sole Administrator of the College, later as Acting Provost, and she later competed with others and came first in the interview process for the substantive Provost of the College of Education. And for the five years she was there, she distinguished herself, she really turned around the college and left it in far stronger standing.

“So it was not really difficult when I returned to Government House after my sabbatical to call on her and asked her to take over as the Ekiti SUBEB Chairman where, again she did a yeoman job because that is a very difficult office in many ways, but just as my Lord Bishop said, she will always smile, soft spoken and very determined about the task.

“Between the time she took over and when she left that office, she had raised the enrolment figure in our primary school by over 40,000 pupils and then she went to help run a number of our World Bank- assisted projects as my Special Adviser on Basic, Secondary and Technical Education.

“Prof Aladejana also did several other things, in fact my wife was telling me a couple of days ago how she developed a gender policy for our secondary schools and worked closely with her in developing that policy, before it became public.”

In his sermon, the Catholic Bishop of Ekiti Diocese, Most Reverend Felix Ajakaiye, urged Nigerian youths to surmount their challenges like the late Aladejana whose father’s death did not prevent her from making headway in her academics as a teenager, adding: “she suffered a lot but persevered in hardship and came out triumphantly.”

Bishop Ajakaye who spoke from the Books of Wisdom 3:1-9 and 2nd Thessalonians 4:13-18, further charged the congregation to live a good life and use their talents positively with the mindset that they would account for their deeds on judgement day.