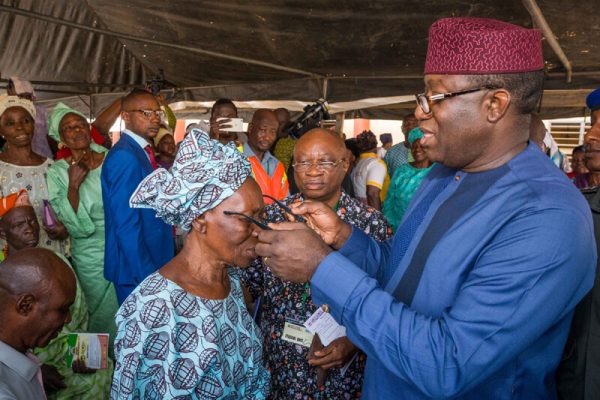 Share
Facebook Twitter LinkedIn Pinterest Email
The Ekiti State Governor, Dr. Kayode Fayemi, on Wednesday said his administration has begun the process of reversing the poor health indices of the State’s health sector in order to produce good health outcomes for the citizenry.
Speaking in Ikere-Ekiti at the flag off of the quarterly free health mission, the Governor said he would provide the leadership required to stop the “sobering decline in Ekiti State health indices from 2016 to 2018”.
No fewer than 50,000 residents are expected to benefit from medical attention, including corrective surgeries and eye treatment, in the first phase of the programme, which is designed to hold on quarterly basis.
Fayemi, who expressed his determination to ensure that the state does not lag behind in the delivery of quality and effective health care service, said the goal of his government is to ensure that Ekiti State “regains its place in the comity of states by reworking our health system to deliver improved health indices as marker of a healthy society”.
He added: “In Ekiti State as at 2018, mortality rate among children was 49 deaths per 1000 population in the first month of life. 69 deaths per 1000 in the first year of life while it is 86 deaths in the first five years of life of the children. Ekiti State skilled birth attendants also dropped from being the first in the southwest region in 2015 now to being the 5th in position among the southwest States.”
While speaking on the free health mission, the Governor said the programme is a vehicle to expand access to basic health interventions that have been proven to improve the health of women of reproductive age and children.
Fayemi, who administered immunization to some babies at the programme, said no fewer than 50,000 Ekiti residents would have received free healthcare services in the first phase of the programme, noting that over 500,000 people participated in the mission during his first tenure as governor between 2010 and 2014.
“By the account from the first 2 days of this mission, we believe that by the end of this first phase, we would have been able to serve over 50,000 residents of Ekiti State.  This mission is a first instalment of a revolutionary health programme portfolio that will ensure that healthcare can be delivered quantitatively and sustainably,” he said.
Earlier, the Permanent Secretary in the Ministry of Health, Dr. Folake Olomojobi, had said that 10,246 people had received free treatment in general outpatient cases, dental surgeries, HIV/AIDS test, family planning and other health issues within the first two days of the mission.
Olomojobi noted that the Basic Healthcare Fund recently launched by President Muhammadu Buhari is an endorsement of Fayemi’s “Facility based free health programme” funded and implemented between 2011 and 2014.
Also speaking at the flag off ceremony, the Ogoga of Ikere Ekiti, Oba Adejimi Adu, commended Governor Fayemi for initiating the programme, calling on Ekiti residents to troop out and benefit from the health mission. 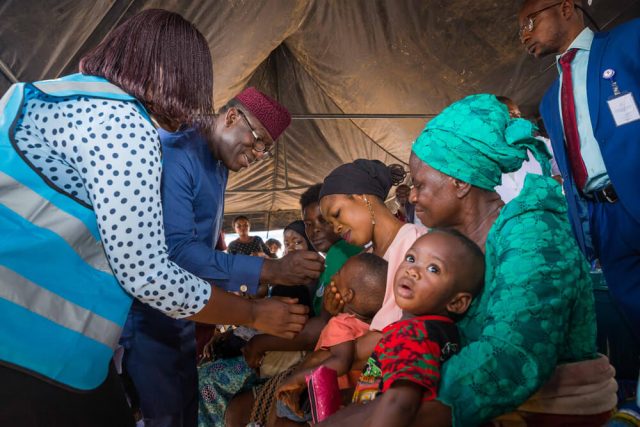 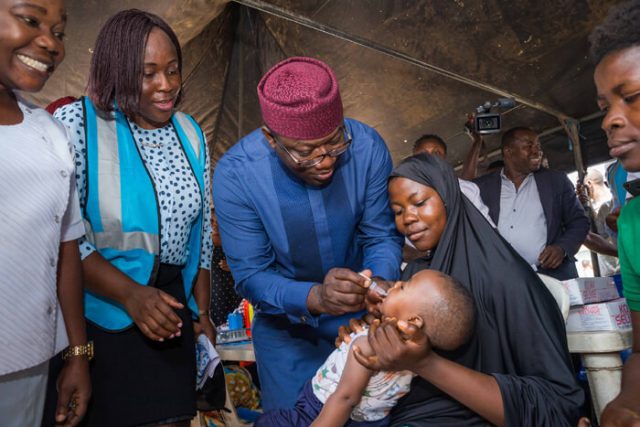