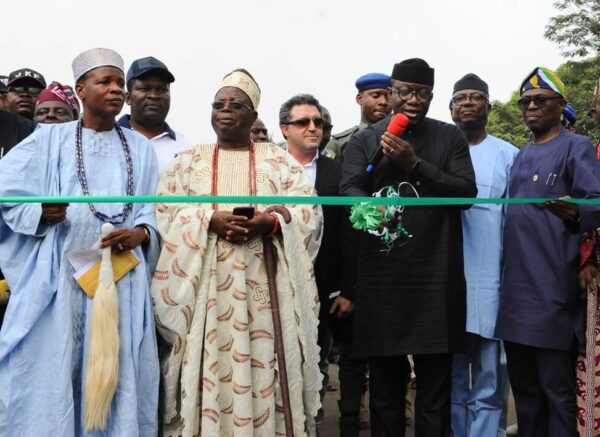 The Ekiti State Governor, Dr. Kayode Fayemi, on Monday flagged off construction of four major roads linking seven local government areas of the State.
The roads are Agbado-Ode-Isinbode-Omuo Road linking Gbonyin and Ekiti East Local Government Areas; Ilupeju-Ire-Ijan-Igbemo Road linking Oye, Gbonyin and Irepodun-Ifelodun LGAs; Oye-Ikun-Otun-Dairy Farm Road, which links Oye, Ilejemeje and Moba LGAs; and Aramoko-Erijiyan-Ikogosi Road in Ekiti West LGA.
Flagging off the construction works, the governor reiterated the commitment of his administration to meeting the aspiration of the people for infrastructure.
He also challenged the people on their civic obligations, including tax payment.
Dr. Fayemi, who was hailed by the people for embarking on the road projects, assured that no part of the State will be left out in terms of infrastructure development.
He said his government has continued to pursue lofty goals in spite of daunting financial challenges.
The governor disclosed that the administration has sourced for funds to execute the capital projects which are captured in the 2020 budget.
He said: “Permit me to reiterate the resolve of this administration to make all parts of the state accessible by good roads as enshrined under the Infrastructure and Industrial Development pillar of the five cardinal points of this administration.
“In our quest to restore Ekiti values, government has continued to pursue lofty goals even in the face of daunting challenges.
“We are not allowing paucity of funds to deter us in the execution of our programmes.”
While speaking on Ilupeju-Ire-Igbemo-Ijan Road, the governor expressed optimism that the road reconstruction would address the challenges of moving the finished products of Ire Burnt Bricks as well as movement of the people in the area.
He added that the road will enhance the socio-economic development of the people in the affected towns.
On Oye-Ikun-Otun-Dairy Farm Road, Fayemi said the rehabilitation work would not only provide job opportunities for engineers, artisans and casual workers among others, but would also boost the operations of Ikun Dairy Farm, which was recently taken over by Promasidor Nigeria Limited.
He explained that the project was commenced in 2011 with its scope on selected sections but the new scope of work involved “total asphalt overlay from Oye to Ikun, with an extension to Ikun Dairy Farm up to Ekiti State boundary with Kwara State”.
He said: “This road will boost the economic activities of this area and enhance agribusiness.
“You will recall that recently the State Government signed a Memorandum of Understanding with Promasidor Nigeria Limited on resuscitating Ikun Dairy Farm for milk production.
“This road project, when completed, will boost the operations of the company, facilitate easy access to the farm and marketing of the dairy products.
“The State’s Internally Generated Revenue will be improved, apart from providing jobs for many of our youths.”
Fayemi noted that the Agbado-Ode-Isinbode-Omuo Road, which is a shorter route to Abuja from Ekiti State, was long abandoned by motorists and became a death trap.
He said the road, on completion, and the extension of the Dangote-handled Obajana-Kabba Road to Omuo, commuters would have a new lease of life.
His words: “By the time it is completed and with the concurrence of the Federal Government to extend the current construction being undertaken by Alhaji Aliko Dangote from Obajana-Kabba and now from Kabba-omuo, Ekiti would enjoy a much shorter and safer journey to the Federal Capital Territory and the northern part of the country.”
Dr. Fayemi warned the contractors handling the four projects against substandard jobs.
He advised them to ensure “strict adherence to specifications with a view to delivering high  quality, durable and serviceable roads within the stipulated time”.
The governor also called on citizens and residents of the state to fulfil their civic obligations, especially tax payment, in order to strengthen the government’s capacity to meet their expectations.
He said the citizens support would enable government actualise the quest for infrastructure development and make Ekiti State better.
Members of the benefiting communities rolled out the drums to welcome the governor whom they thanked immensely for remembering their long abandoned roads.
The Onire of Ire Ekiti, Oba Victor Bobade, said Fayemi’s decision to reconstruct Ilupeju-Ire-Igbemo-Ijan Road was not unrelated to his relationship with the people whose pains the governor also felt.
Oba Bobade said the road project would enhance the development of his domain, Ire Ekiti, as well as tackle the challenge of transporting goods from Ire Burnt Brick factory, which was revived by Fayemi during his first tenure.
Another traditional ruler, Olomuo of Omuo Ekiti, Oba Noah Omonigbehin, thanked Fayemi for spreading development to other parts of the State, adding that the reconstruction of Agbado-Ode-Isinbode-Omuo Road will reconnect Omuo, Isinbode and Ode people, who have been cut off from one another by the very deplorable road.
Each of the contractors handling the roads was given 12 months to complete the project.