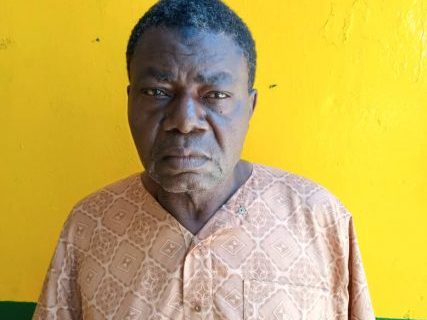 The Kano State Police Command says it has arrested a father, Aminu Farawa, for allegedly immuring his 30-year-old son, Ahmed Aminu, for seven years without proper feeding and medication.

The Spokesman of the Command, Abdullahi Haruna, a DSP, confirmed the development in a statement on Friday.

Haruna disclosed that the suspect was arrested on August 13 in his home in Farawa Quarters in a raid conducted by men of Operation PUFF ADDER, sequel to the intelligence gathering.

He said: “The Command received information that the suspect confined his 30-year-old son, inside a garage in his house situated at Farawa Quarters in Kumbotso Local Government Area of the state, for seven years without proper feeding and healthcare.

“On receiving the information, a team of Operation PUFF ADDER swung into action and rescued the victim.”

Haruna said the rescued victim was referred to the Murtala Muhammed Specialist Hospital, Kano for treatment.

He noted that preliminary investigations indicated that the suspect incarcerated the victim over alleged drug abuse.

The spokesman added that the Commissioner of Police, Habu Ahmad, has ordered transfer of the case to the State Criminal Investigations Department for discreet investigations.