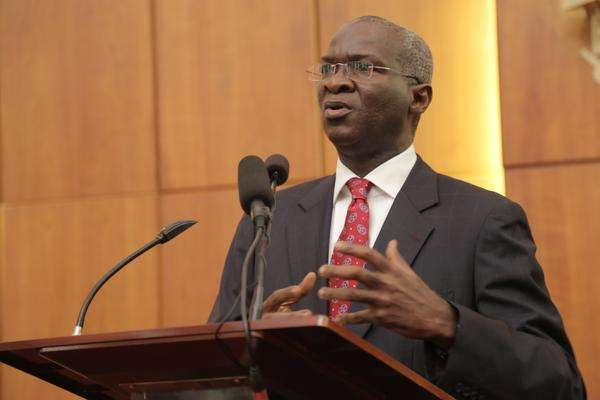 The Minister of Power, Works and Housing, Babatunde Fashola, has called on state governments to partner with the various electricity Distribution Companies to ensure improved power delivery.
Fashola made the call on Saturday in Enugu when he led a delegation on a courtesy visit to Governor Ifeanyi Ugwuanyi of Enugu State.
He said the partnership was to identify areas of intervention by states in power distribution, adding that the federal, states and local governments are part owners of DisCos.
The minister said 60 per cent shares of the companies were sold to the private sector while the remaining 40 per cent belong to the three tiers of government.
Fashola expressed dissatisfaction with the rift between the Enugu Electricity Distribution Company and the state government and called for amicable resolution of the differences.
He said: “If I may advice, quarrelling with the Enugu Electricity Distribution Company is not the way to go and my advice is based on what I know.
“I gave this advice for a couple of reasons, 60 per cent share of Enugu DisCo was sold to the private sector like other distribution companies in the country.
“The owners of the remaining 40 per cent are the federal, state and local governments, so it seems to me that the more we quarrel with the companies, the more we quarrel with ourselves.
“State governments must understand that they are part and parcel of the DisCos and so, they have a responsibility to ensure that they contribute their quota to make the companies work.”
Fashola said the generating companies had 2000 megawatts of power that could not be distributed because of inadequate transformers and other distribution facilities.
He said the Federal Government had privatized the power sector and called on state governments to pass laws that would give them the right of way for distribution expansion.
The minister urged the state government to take advantage of the various initiatives of the Federal Government to boost power distribution in their states.
He said the eligible customer policy was to enable consumers to take power directly from the generating companies without having to go through the distribution companies.
The minister said the policy was designed to encourage heavy consumers of energy to build their own distribution network to take power directly from the generation companies if they were not satisfied with DisCos services.
According to him, the mini grid regulation policy allows people who are building power systems that are one megawatt and below to do so and distribute the power without having to apply for a license.
In his remark, Ugwuanyi commended the minister for the visit, and added that it was reflection of his personal commitment to ensure timely execution of federal projects in the state.
He said the deplorable state of federal roads in the state had aided criminal activities and exposed the people to deadly hazards.
Ugwuanyi commended the Federal Government for the steps being taken to address the problems, adding that he was optimistic that the visit would ensure speedy execution of federal projects in the state.
The governor said the state had executed various federal projects and called for reimbursement to the state government.