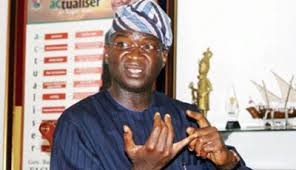 Governor Babatunde Fashola of Lagos State on Wednesday said the state’s present external debt profile of N160 billion did not mean its economy was weak or it over-borrowing.
The governor spoke while inspecting progress of work on the Light Rail Terminal in Iganmu, Lagos.
Fashola said that the economy of the state had recorded exponential growth over the years and had been consistently rated high by international rating agencies.
Fashola said criticisms that the state was borrowing too much were unfair.
According to him, the debts are to fund infrastructure projects and meet the needs of its growing economy.
The governor said that the state was promptly servicing its debts, winning the confidence of the World Bank and other creditors.
Fashola said: “I think it was the Debt Management Office that published the report that we have a debt of about N160 billion.
“I don’t know the intent of the publication, but if it was to inform the public, I think we have always kept the public informed anytime we borrow money.
“But you see, when people talk about debt of a state like Lagos, they forget that after Nigeria, South Africa, Egypt and one other country, we have the fifth largest economy in Africa.
“When you are talking of about a billion naira debt to a population of over 21 million people, because if you are measuring the debt, you also have to measure the responsibility.
“Those are the things people keep in isolation.
“As I have said, if it is a matter of public information, we have always kept it in the public space.”
Fashola said that no state could raise money by bond the way the state had done without the Federal Government’s approval.
He said: “Securities and Exchange Commission is one of Federal Government’s regulatory agencies through which we must pass.
“If they say okay, it means there must be something good about the debt.
“Our rating as a state is the same as that of the Federal Republic of Nigeria, BB Minus-Stable with a positive outlook.
“We are the only state in Nigeria that has that rating.
“The first bond that was taken during my first tenure has been paid, the first tranche.
“I think the second tranche will be due around 2016 or 2017 and we are already making provisions.
“The provisions that will be there will be in excess of what is needed.”
The governor expressed satisfaction at the pace of work on the rail project, saying that things would have been faster if certain essentials were available.
Fashola said the rail tracks had been laid and the project would be delivered very soon.