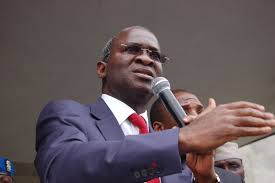 A former Governor of Lagos State, Babatunde Fashola, has restated the need to decentralise the Nigeria Police Force because of growing insecurity in the country.
Fashola made the call while answering questions from senators during his screening to become a minister.
He dismissed fears that state police could be abused by some states for political reasons.
The former governor said such excuse was not as important as the loss of lives and property being experienced at present.
He said: “There have been arguments as to why we should not go there but those arguments do not go far, they do not address the responsibility that government has.
“We are talking about women issues, rape, domestic violence in all the states but who is prosecuting them when the police is busy chasing criminals.
“So, should our mothers and sisters be allowed to tolerate rape?
“If we are afraid of abuse, we can have six zonal commands of the existing police force and not every state should start if they cannot afford it.
“The number available to me is that we have probably a standing police force of about 500,000, less than a million, to a population that is heading towards 180 million.
“So we are under-policed and if the Federal Government wants to take up this responsibility alone, can it really do so at the micro level, that is at the state and Local Government levels.”
The former governor stressed that the Federal Government should not shy away from addressing the security challenges in the country.
Fashola noted that any effort made by the government to protect lives and property of citizens would restore the confidence and respect of Nigerians.
He said: “My attitude when I was a governor was to see criminals as my competitors and I desired to win and to use my resources to out-spend the competition.
“Meanwhile, the State Government didn’t own the architecture, the police.
“It was Federal Government architecture.
“At a time the police operated without enough arms and enough uniforms.
“They operated without protective vests and even vehicles to respond and when there is vehicle there is no fuel.
“It was then clear to me that this was not something one person could do and we brought all the stakeholders together.”
Speaking on the importance of value-added tax, Fashola called all State Governments to tap into the potential in their states to generate more revenue.
Fashola also stressed the need to review the Abuja Master Plan to meet the problem of accommodation, resettlement and other challenges in the city.
NAN.