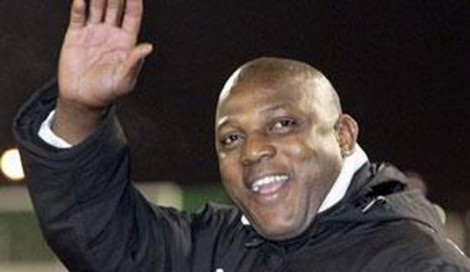 The family of the late former Super Eagles Coach, Stephen Keshi, has moved his remains from Faith Mediplex Hospital, Benin, Edo State to Stella Obasanjo Hospital for autopsy.
Keshi’s remains had been deposited at Faith Mediplex where the former Super Eagles captain was rushed to early on Wednesday.
The family’s spokesman, Ricky Aburimen, who had rushed the late national team player to the hospital, told newsmen that the move became necessary for autopsy to be conducted on the body.
Aburimen said Keshi was not a registered patient in the hospital where he was pronounced dead.
“And as such, his remains needed to be moved to a government-owned hospital for a proper investigation into cause of his death,” Aburimen said.
He said the cause of his death should not be a subject of speculation, hence, the reason for the autopsy.
Aburimen, who is the immediate older brother to the late wife of the Nigeria soccer icon, Kate, described Keshi’s death as shocking.
According to him, he had complained of pains in his leg for some days and they kept massaging it for him.
When he complained of it last night, they massaged it again, adding: “About one and half hours after the massaging, he was in serious distress and was gasping for breath.
“That was how we rushed him to the hospital (Faith Mediplex), a distance of about 20 minutes.
“But by the time we arrived at the hospital, the doctor certified him dead.
“That was sometime between 11:30 and 11:45pm.
“It was the nurse that first came out.
“She checked for his pulse‎ and said there was no pulse in him.
“Doctors later came and did all the stuffs they did, but nothing came out of it.”
When asked what could have been the likely cause of Keshi’s death,‎ Aburime said no one should speculate the cause of his death until an autopsy is conducted by qualified doctors.
Aburimen said the report of the autopsy would be made public at a press conference befitting of Keshi’s status.
Also at the hospital was Ebuka Ofuone, a cousin of the late coach, who was said to have lived with him from his childhood but he could barely utter a word as a result of grief.
Keshi, 54, had won the African Cup of Nations for Nigeria as a player in 1994 and repeated the feat as coach in South Africa in 2013.