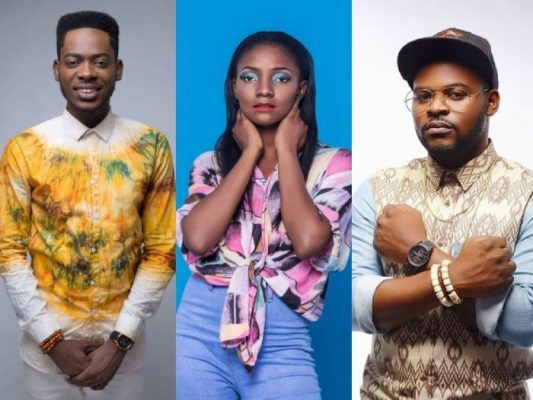 Musicians Folarin “Falz” Falana and Ric Hassani have joined fans to react to the ongoing wedding between Adekunle Gold and Simisola Ogunleye.
The News Agency of Nigeria reports that news of the wedding between the two music stars broke on Wednesday morning, causing a frenzy on social media.
Reacting to the news, Falz shared a video (gif) of a young girl with tears running down her cheeks on his Twitter page: @Falzthebahdguy, which fans found funny.
At the time of this report, Adekunle Gold, Simi and Falz are the top three trends on Twitter as fans have taken to the social network to congratulate the couple and express their surprise.
Simi and Adekunle Gold’s continuous denial of their relationship left fans confused until a picture showing them kissing during her sold-out Lagos concert was released few weeks ago.
Falz was not left out of the discussion as relationship rumours between him and Simi sparked in 2015 after they worked on the hit song: “Soldier.”
NAN reports that speculations intensified in 2016 when they released the joint album: “Chemistry,” with a controversial and intimate cover art.
Meanwhile, “Gentleman” crooner, Ric Hassani, reacted to the news in an Instagram comment via his page: @richassani.
Hassani said” “They have been dating years before you all knew what was going on. I have known each of them about ten years now. Privacy is the best.”
Also, fans of the two singers have flooded social media with congratulatory messages while they draw lessons from the privacy and simplicity of the relationship.
@Frank_LeanXV tweeted: “Simi and Adekunle Gold are getting married. How? When? Whaattttttt? Falz? Where? Congratulations to them.”
@Sire__Iretomiwa said: “Congratulations to Adekunle Gold and Simi on theit wedding today. God bless your union.”
@iSlimfit said: “I heard Simi and Adekunle Gold are getting married today and they invited just about 300 guests! Las las, Wedding no be concert! I have gotten inspiration!”
@Adonasofficial tweeted: “After being through the worse together, Adekunle Gold and Simi sets for the better days ahead. Congratulations.”
@Engr_Series said: “Simi and Adekunle Gold’s wedding today? No one saw this coming… They’re my fav’ couple already.”
@EzraelAni tweeted: “Now that Simi and Adekunle Gold are finally getting married, Simi’s full name will now be “Simi Gold” right?”
The white wedding has reportedly been scheduled to hold on January 10, with only 300 lucky invited guests billed to witness the epoch making event at Ilashe Beach.
NAN.