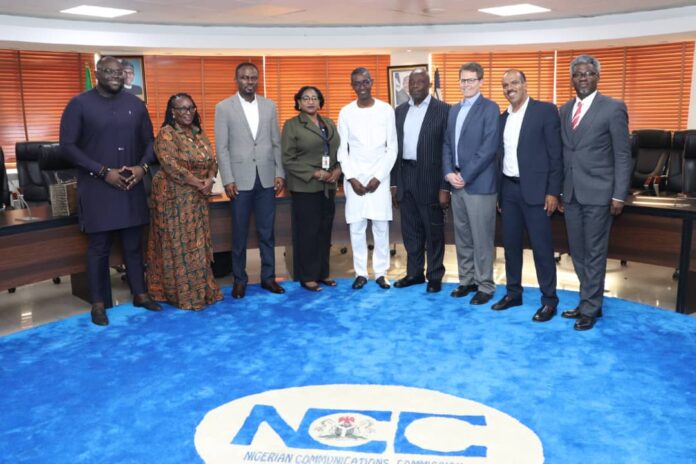 Top Management staff of Facebook, a leading global digital services provider, paid a visit to the Nigerian Communications Commission on Friday to explore opportunities for collaboration and partnership for infrastructure deployment to strengthen connectivity, enhance businesses and bolster citizens’ embrace of the digital culture.
Underscoring the centrality of infrastructure to the flourishing of digital culture, Ibrahima Ba, Network Investment Lead at Facebook Office in the United States, who led the Facebook delegation to the NCC, stated that robust infrastructure is the bedrock of the massive connectivity that signposts Facebook, WhatsApp and Instagram because without adequate and right type of infrastructure, there can be no robust connectivity.
Ba recalled that Facebook had successfully undertaken two connectivity projects in Edo and Ogun States involving a total of 800km of fibre connecting institutions and operators towers.
He said considering the connectivity gap that still exists in the country, there is a great need for more and even further expansion of infrastructure because increased penetration of services will require further deployment of infrastructure, which will encourage investment and promote digital culture.
According to Ba, Nigeria is very important to Facebook for many reasons, but particularly because it is Africa’s most populous country.
Hence the desires and dedication by Facebook to explore further opportunities for partnerships in infrastructure expansion.
He emphasised that Facebook looks forward to seeing opportunities for partnerships manifest because such collaboration will result in kilometres of infrastructure expansion in fibre connectivity.
He advised the Commission to facilitate further liberalisation of partnership and collaboration processes with stakeholders.
Edoyemi Ogoh, Deputy Director Technical Standards and Network Integrity at NCC, who led the team that received the Facebook delegation on behalf of the Executive Vice Chairman and Chief Executive of NCC, Prof. Umar Danbatta, thanked the Facebook team for the visit.
Ogoh commended the group for the model it has adopted in participating in the Nigerian market by partnering with licensees of the Commission, and assured the team of NCC’s irrevocable commitment to infrastructure expansion to enhance better connectivity.
He affirmed that NCC is aware of how central infrastructure is to the expansion of telecom services, and said that the realisation explained NCC’s adoption of the Open Access Model and the licensing of infrastructure companies to cascade fibre to the hinterland of Nigeria.
Ogoh also informed the guests that President Muhammadu Buhari’s recent re-designation of NCC’s supervising ministry as Ministry of Communications and Digital Economy speaks further to Federal Government’s commitment to encouraging more citizens to embrace digital culture.
He declared that the Commission is central to these processes and the Minister of Communications and Digital Economy, Dr. Isa Ali Ibrahim Pantami, has continued to also demonstrate his commitment to tackling bottlenecks to infrastructure expansion.
He cited the recent meetings the Minister, the EVC and Dr. Kayode Fayemi, the Governor of Ekiti State and Chairman of Nigerian Governors Forum, had, which focused on streamlining and standardising Right of Way charges as eloquent testimony to Government’s commitment in this regard.
Ogoh also stated that the Commission is finalising processes to institute the “Dig Once Policy” that will encourage operators and other key players in infrastructure segment to have greater strategic collaboration in the laying of fibre, especially in the context of the upcoming National Broadband Plan 2020-2025.
Ba came to NCC with four of his colleagues: Erik Schmidt, Network Strategy Manager, Facebook Infrastructure; Adaora Ikenze, Head West Africa (Public Policy); Imran Abass, Partner Manager, Sub Sahara Africa; and Fargani Tambeayuk, Africa Public Policy Manager (Connectivity).
In a note of thanks and closing remarks by Jerry Ugwu, Deputy Director Legal and Regulatory Services at NCC, the Commission expressed delight at the meeting, which was initiated by Facebook.
Ugwu said NCC will explore the proposition by Facebook further and hope that discussions with Facebook will continue in order to give concrete expressions to the desires and vision of the two organisations.