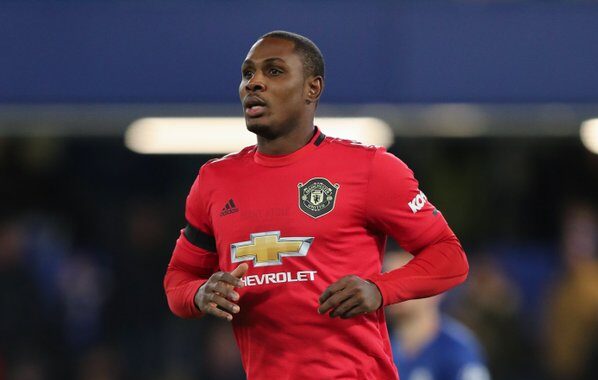 Former Nigerian international, Odion Ighalo, was an unused substitute as Manchester United secured safe passage to the FA Cup fourth round against Watford.

Scott McTominay was one of two survivors from Wednesday’s loss and led United out as captain for the first time, with his early header proving enough to seal an unconvincing 1-0 victory against Sky Bet Championship outfit Watford.

There had been high hopes when academy graduate McTominay’s downward header went in off the far post, but Solskjaer’s men failed to put their foot down as Watford targeted their set-piece frailties.

Recently-appointed Hornets boss Xisco Munoz saw his side push until the end at an empty Old Trafford, but they failed to create clear-cut openings against a United side that never got going.

Solskjaer will be relieved to be in Monday’s fourth-round draw after a match that had started with so much promise.

Daniel James fired a shot bound for the top corner until Daniel Bachmann’s near post save.

The Watford goalkeeper pushed behind for what proved a costly fifth-minute corner, with McTominay meeting Alex Telles’ ball with a header into the ground that bounced in off the far post.

United continued to look dangerous but their soft underbelly from set-pieces gave Watford hope, with Will Hughes’ free-kick flicked on and Adam Masina was denied by a mixture of Axel Tuanzebe and Dean Henderson.

Eric Bailly headed wide from a corner when the hosts returned to the attack, but their defence was looking uneasy and the Ivorian faced handball appeals after some penalty box pinball.

But Solskjaer’s side did click into gear impressively as half-time approached and a fine team move ended Van De Beek sending a sumptuous flick through for Juan Mata to get a shot away on Bachmann’s goal.

The unremarkable first half ended in an enforced changed for United after Bailly was caught in the back of the head by goalkeeper Henderson when punching clear.

After lengthy treatment, the defender walked off groggily and was replaced by Harry Maguire, who took the captain’s armband back off McTominay at the break.

The second period got off to an even start, with Joao Pedro stretching to get an effort on Henderson’s goal in-between comfortably saved James and Mason Greenwood attempts at the other end.

Solskjaer introduced Marcus Rashford and Anthony Martial in a bid to add some increased intent to the hosts’ attack, with substitute Ken Sema’s set-pieces looking Watford’s most likely avenue to a leveller.

Maguire had a header and Rashford was denied by a low Bachmann save as the match entered the final 10 minutes, with Watford substitute Joseph Hungbo seeing a strike deflected wide as they failed to find an equaliser.