The Lagos State Police Command has finally reacted to a trending video, where some young men accused policemen from Area H, Ogudu of harassment.

The young men filmed their encounter with the policemen, live streaming it on Instagram.

Just as they were crying out to members of the public to come to their rescue, they continued to film, just as many people began to react to their outcry.

This latest video came on the heels of many Nigerians, including human rights activists, urging the Inspector-General of Police, Mohammed Adamu, to look into the activities of policemen, who are now fixated on young men.

Some of them alleged that under Adamu’s leadership, police impunity has increased, with the IGP showing tragic weakness in curtailing the excesses of the police.

The number of videos showing police harassment of young Nigerians is now steadily on the increase.

The police usually accuse the young men of being cult members or cyber fraudsters, otherwise known as yahooyahoo boys.

Most of these victims later take to their social media handles to allege extortions by these policemen.

Just last week, a young man was shot to death by policemen at Port Harcourt, Rivers State, leading to Governor Nyesom Wike expressing anger and disgust over the police action and joining in the calls for #EndSars.

Similarly this week, a video was sighted on social media where some policemen, with one of them wielding a big stick, repeatedly slammed it on a young man, who was arguing with them.

In this latest video in Lagos State, with focus on the Ogudu Policemen, a young man spoting dreadlock was seen talking on phone, calling on someone to come and rescue them from the policemen.

The vehicle of the policemen had been parked strategically in front of theirs.

According to the young man, he had spent the whole night in the studio and was heading home to have his sleep when the policemen appeared and blocked them.

While expressing the opinion that the policemen were on illegal duty, he further said: “Please Nigerians should come to our rescue.

“This is what young men in Nigeria are going through every day.

“I don’t have anything incriminating on my phone or person, but even if you’re clean, the police will make you look dirty.”

The Lagos State Police Command, however, on Friday, countered him, alleging it recovered Indian hemp and charms from him.

The Lagos State Police Public Relations Officer, Muyiwa Adejobi, said: “The Lagos State Police Command has come across a trending video alleging the police attached to Ogudu Area command of Lagos State of harassment, excessive use of power and attempted extortion, released by some young men today, Friday, 25th September, 2020. The Command wishes to debunk the allegations and urge the general public to regard the video as mischievous, baseless and an attempt to paint the police black.

“To set the record straight, on Friday at about 9.30am, a team of Anti-Crime patrol from Area H, Ogudu, intercepted a Chevrolet saloon car with Registration No SMK 436 DE, with three occupants, on Ogudu Expressway, Lagos State.

“The glasses, front and back, of the vehicle are fully tinted which aroused the suspicion of the patrol team; and efforts to get the occupants identified was rebuffed, as they refused to come down or wind down the side glasses of the car. In a bid to detect and identify the occupants of the vehicle for security reasons, coupled with the Police’s experience on criminals’ modus operandi, the patrol team called for reinforcement and eventually, the three occupants were arrested and the vehicle towed to the station at Ogudu. The occupants were identified as Okoh miracle, 18, Awodoyin Mayokun, 24, and Shonaike Adebola, 20. During the search on them and the car, the police recovered a wrap of weed suspected to be Indian hemp and some charms.”

Adejobi further explained that the Lagos State Commissioner of Police, Hakeem Odumosu, has ordered for thorough investigation of the incident, while appealing to Lagosians, particularly the youth, to always respect the law and surrender for check at the instance of the police.

“He also reiterated that in as much as the police will uphold the rule of law, protect human rights and dignity, it will not condone dissemination or spreading of fake, unfounded or malicious news to malign the image of the Nigeria Police or create security threats in the state,” said Adejobi. 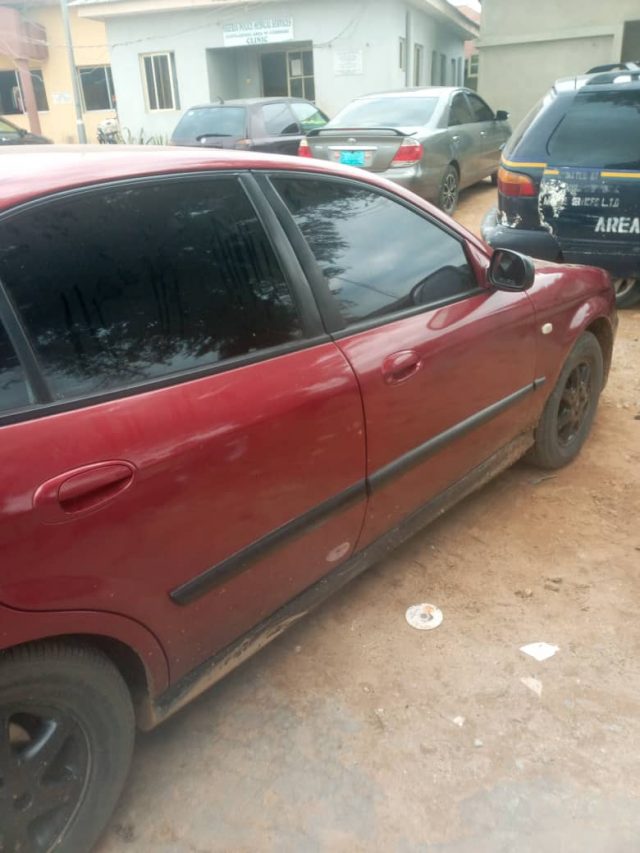 Breaking: All security agencies have deployed for Lagos curfew — Police

Police read riot act to violators of curfew in Imo