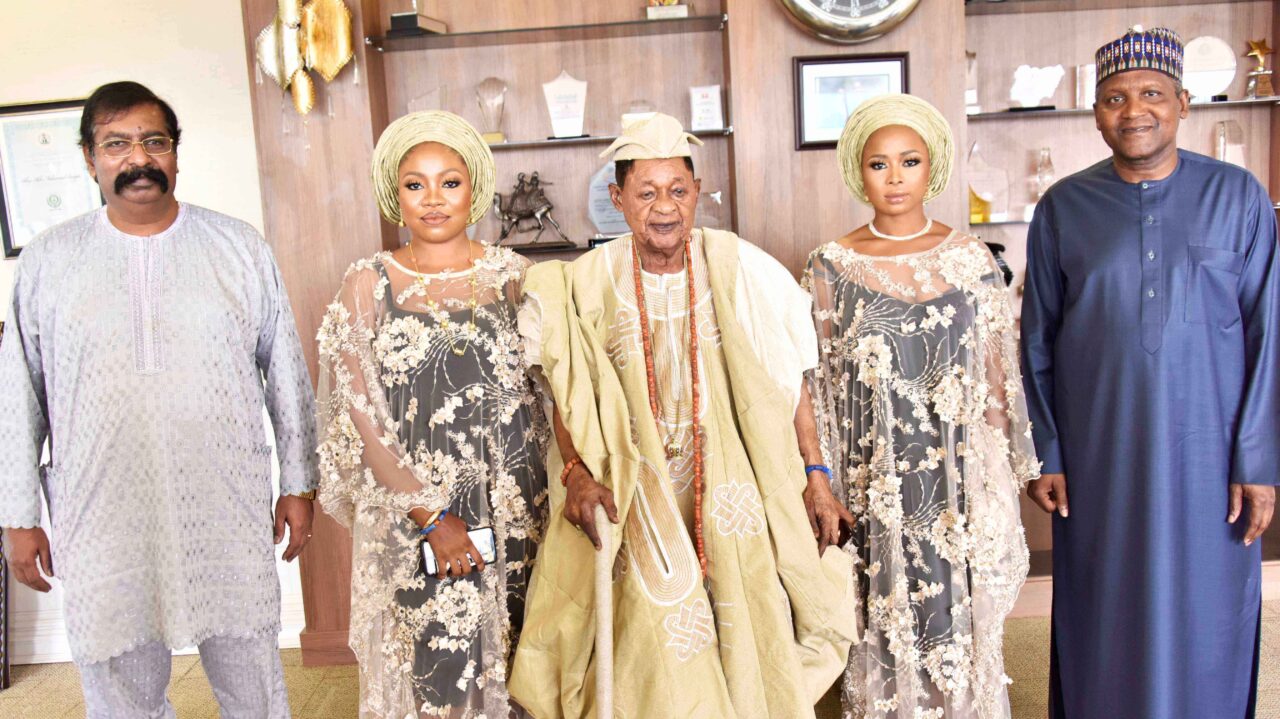 The Alaafin of Oyo, Oba Lamidi Adeyemi, has appealed to the President of Dangote Group, Aliko Dangote, to set up viable companies in Oyo kingdom, as he is doing across the country.
The Alaafin lauded Dangote for employing thousands of Nigerian youth, noting that the nation will witness real growth and development when able youths are gainfully employed.
The paramount ruler said this over the weekend during a meeting with the Management of Dangote Group in Lagos.
Dangote assured the Alaafin of his readiness to bring investments to the ancient town by exploring the agricultural potentials of the area to help reduce youth unemployment and vulnerability of women.
He promised to mandate the management of Aliko Dangote Foundation to look into social welfare projects it could undertake for the benefit of the people of Oyo.
Dangote said all hands should be on deck now more than ever before for job creation in view of the growing insecurity in the land, adding that joblessness is a major factor breeding criminal elements.
He added: “If we must enjoy what we have, we must be secured.
“The security of lives and property is not that of government alone, we all have a part to play.
“The whole thing still has to do with adequate funding.”
The business mogul told the Alaafin that his Foundation would put up a team to study the situation and come up with projects that could be undertaken in Oyo that would have positive impact on the youths and vulnerable women.
Earlier, the Alaafin had told his hosts that he came because of the concern for growing youth unemployment in his domain in particular and the nation in general, saying that he needed to be assisted to create jobs for the youths.
Oba Adeyemi pointed out that Dangote is a phenomenon in Nigeria and his companies are noted for job opportunities across the country and pleaded that the company should help look into areas where the Alaafin palace can partner with Dangote Group for mutual business relationship.
He explained that Oyo is rich in agriculture and urged the company to come and tap into the agriculture potentials of the town to benefit of the two parties adding that the agricultural sector has potentials for job creation and food security.
The Alaafin and his entourage were received by Dangote at the Ikoyi global headquarters of the conglomerate together with the Group Executive Director of the Company, Chief Devakuma Edwin, who told the monarch how the company had been contributing to the engagement of youths in parts of the country through the Dangote Youth Rice Farm project.
Edwin then introduced the Alaafin to the management of Dangote Rice and assured that the team would take a study of Oyo town with a view to replicating the youth rice farm project, which had earlier been introduced in neighbouring Iseyin, also in Oyo State, so as to create jobs for the teeming graduates.
Edwin explained that the Dangote Youth Rice farm project is an out-grower scheme where the company would provide seedlings, fertilizer, chemicals and other input to the youth farmers and upon harvest buy back the paddy rice from them at the prevailing market rate and then process for consumption.
The GED regretted the growing youth unemployment, describing it as a serious issue that should be addressed quickly.
He lamented that many youths have taken to crime due frustration arising from joblessness.
Edwin said: “A situation where a brilliant child could not go to school because the parents are not paid salaries is very frustrating both to the child and the parents.
“A situation where others struggled to go to school and graduated only to be jobless could be very frustrating too.
“All these are what cascade to social malaise like terrorism, banditry, kidnapping and other crimes because if the youths can get a job to do, they just would have to channel their energy towards a direction.
“This is just one the reasons we started the youth rice farm projects.”