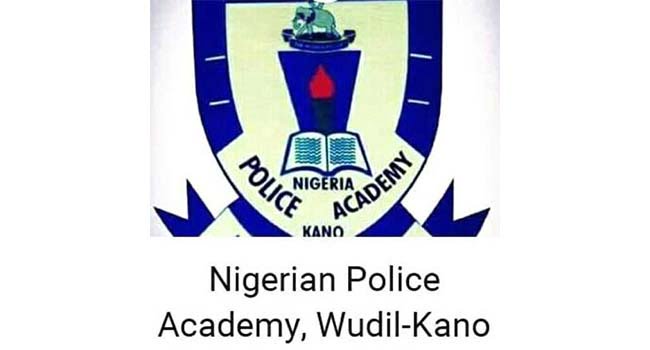 A senior staff of the Nigeria Police Academy, Wudil, Kano State, Dr. Goddy Osa Igbaekenem, has exposed alleged victimisation against his person as well as running of a parallel National Assembly in the Academy, especially alleged illegal approval of allocation of public funds, passing of motions and carrying out oversight functions.

The weighty allegations were contained in a petition on the Acting Coordinator and top officials of the Academy.

The petition by Dr. Igbaekenem was addressed to the Speaker of the House of Representatives, Rt. Hon. Femi Gbajabiamila.

Igbaekenem traced and linked his alleged ongoing ordeal to a letter of introduction he recently received from the Emir of Dutse to the National Chairman of the All Progressives Congress, Senator Adamu Abdullahi.

He wrote: “Mr. Speaker, interestingly, there is another National Assembly sitting in the Nigeria Police Academy, Wudil, Kano state, created by the Acting coordinator, Professor IDABAWA SANI UMAR and the acting Registrar, Mr. Charles Egumba. This ‘National Assembly’ in the Academy has the acting coordinator as the Senate President and the Chairman, Academic staff steering committee as the speaker.”

He said the “”National Assembly” engages in virement approvals appropriation and allocation of public funds, pass motions and resolutions, carry out oversight functions on over N100 million in a new generation bank and other legislative duties.

Igbaekenem further revealed: “The underlining factor for the creation of parallel National Assembly in the Academy is for the management staff to remain in acting capacities to eternity, to render the office of the commandant a toothless bull dog and for the coordinator to continue to supervise the Academy and report directly to the Honorable Minister of Police Affairs office without adherence to extant rules.

“I must reveal at this point that, one of the academic staff wrote to me in a WhatsApp message: ‘This approach they have adopted will compound the issues. Why are they not interested in carrying you along? If they were in your position, how will they feel? If they have difficulties, they should be able to explain for you to understand their efforts and why you may not be able to blame them, instead of operating secretly, as if they were appointed by the Minister. Is this how representatives behave? The Zenith Bank manager kept emphasizing that you were instrumental to the opening of the account and we are all aware that your salaries have not been paid. The Money for that period is in the account. Common sense would have required that your issue is taken as priority and thus, dealt with first. The rest of us have been receiving our salaries but you are not. I don’t understand.’

“This whatsapp message was sent to me when the Nigeria Police Academy’s ‘National Assembly’ engaged me in a hot argument not to obey Abuja NASS resolutions on salary arrears.

“They have already transferred (virement approval) the money over N100 million from Zenith Bank Account to cooperative Account and appropriate same for Hazard allowance and promotion arrears for some selected academic staff. But I told the Academy National Assembly that the Commandant refused to approve the payment because our salary arrears he promised to pay from the money is excluded from their resolutions and oversight function in Zenith Bank. In my letter dated 4th and 14th April, 2021 addressed to the Commandant and Management where I emphasized that I will raise alarm if my salary arrears are not paid, are also attached and marked annexure 7.

“Again, we appeared before the House committee on legislative compliance on the 21st October, 2021 on the need for the Management of the Academy to obey National Assembly resolutions on the payment of salary arrears. Unfortunately, the committee Chairman, Honorable Dennis Idahosa compromised. In the committee sitting, a lawyer asked me if I think I can win the case with my documents that I presented to the committee. It is obvious that it was Honorable Idahosa’s compromise to dispense Justice that led to the creation of parallel National Assembly in the Academy, because the acting coordinator is using his appearance before the committee to intimidate the members of the Academy. The committee letter of invitation dated 21st October, 2021 and the Honorable Minister of Police Affairs’ request letter on salary arrears from the academy are attached and marked annexure 8A and B.

“Interestingly, the over One Hundred and Sixty Million Naira (N160M) that was unfrozen by the Inspector General of Police, is meant to pay outstanding stolen money, belong to the Academy staff. But, the Academy’s National Assembly, varied the sum of over Fifty Million (N50M), appropriated/allocated, to the payment of contributory pension illegal deductions by the Management and left the salary arrears out of their virement approvals, appropriation, motions and resolutions and oversight functions on the money in Zenith bank, in spite of the commandant resolve to pay the salary arrears in line with Abuja NASS resolutions. In one of the occasions, the acting coordinator insulted the Honourable Minister of Police affairs, NASS members and the former Commandant, DIG Zana Ibrahim and I conveyed his words in writing to the DIG in a letter dated 10th June, 2020, the DIG rebuked the acting coordinator and placed him accordingly. But, the chairman of house committee compliance, with the evidence in the same letter accused me of holding on to good document not to obtain Justice under his committee in 2021. The letter dated 10th June, 2020 address to the commandant is attached and marked annexure 9, read paragraph 2 – 4.

“Sir, it may interest you also to know that the acting coordinator is fond of referring to your House of Representatives members as ‘…these boys that spoil Nigeria or these boys that destroyed Nigeria are talking…’ My efforts at several instances made the POLAC Academic Staff Steering Committee to function in the interest of the Academy, until recently when it nose-dived into the National Assembly of some sort, created by the authority of POLAC. The former IGP and the Honourable Minister of Police Affairs directed the former Commandant, DIG Zana Ibrahim not to allow POLAC Lecturers to come together to form a union like ASUU inside the Academy. However, I was the one that met the DIG on a peace mission in his office until about 11pm on a day to our inauguration, before a clean bill of health was given to us to take off the lecturer’s most important committee.

“The main purpose of the committee is strictly on welfare of POLAC Academic staff, because of the regimented nature of the Academy. Today, the Academy’s Staff Steering Committee now perform National Assembly functions – virement approvals, appropriations and allocations of public funds, move motions and pass resolutions and oversight functions on funds, admission, academy calendar, visitation to sisters institution and undue consultations in government ministries and agencies etc. A letter addressed to the acting coordinator dated 14th February, 2022 is attached and marked annexure 10.

“In the strength of the above, I seek your urgent intervention to these unprecedented anomalies to avoid further unmitigated disaster in the Nigeria Police Academy, Wudil, in other to enable the police Ivory Tower to meet the yearnings and aspirations of Nigerians. He promoted Dr. Goron Dutse Abdullahi, HND conversion graduate who never had university lecturing experience and resumed academic activities in 2018 as a lecturer II, as he was recommended by the department on his date of appointment. But, the acting coordinator decided to make him a Professor recently in outright disregards to the National University Commission, NUC, directives on fake Professors in Nigeria University. NUC letter dated 6th June, 2022, is attached and marked annexure 11.

“Professor Indabawa acknowledged that there are fake Professors, fake lecturers, illegal promotions, illegal placement, illegal recruitment etc in the Academy. He confirmed that he did not want to sack anybody from government work if he decided to correct these anomalies. A letter addressed to the acting coordinator dated 20th April, 2022, is attached and marked annexure 12.

“Mr. Speaker, the former management of the Academy who are facing criminal trials at the Federal high court in Abuja, never committed the myriad of offences that have been and still being committed by Professor Indabawa led POLAC Management who has been in acting capacity since July, 2019 – July, 2022. Sir, these people indicted in this report, have resulted to threat to my life as a result of this my complaints among others.”

Consequently, the aggrieved Dr. Igbaekenem is seeking for payment of his salary arrears as approved by the National Assembly with immediate effect since the fund is already lodged in Zenith Bank for that purpose.

Similarly, since the Coordinator has agreed that he has a good case for it, and with respect to two different letters to that effect, from the Nigeria University Commission, he should be placed as a Professor from October 2019.

Igbaekenem observed that the Coordinator of the Academy, who has been in that capacity for 36 months now, instead of six months, therefore, should immediately be removed and be replaced by the most senior lecturer in the Academy.

He added: The Management who are in acting capacity in the last 36 months and receiving salaries of substantive office holders must be made to return the differences in their monthly salaries immediately.

“The appointments of Heads of Departments and Deans of Faculties, should be strictly based on seniority order in line with the Public Service rules.

“Those that constituted a Parallel Assembly, within the Academy, should be made to face the wrath of the law as it is a crime against the state.”

The petition, which was personally signed by Dr. Igbaekenem, was also copied the Acting Chief Justice of Nigeria and Chairman of the House Committee on Finance among others.