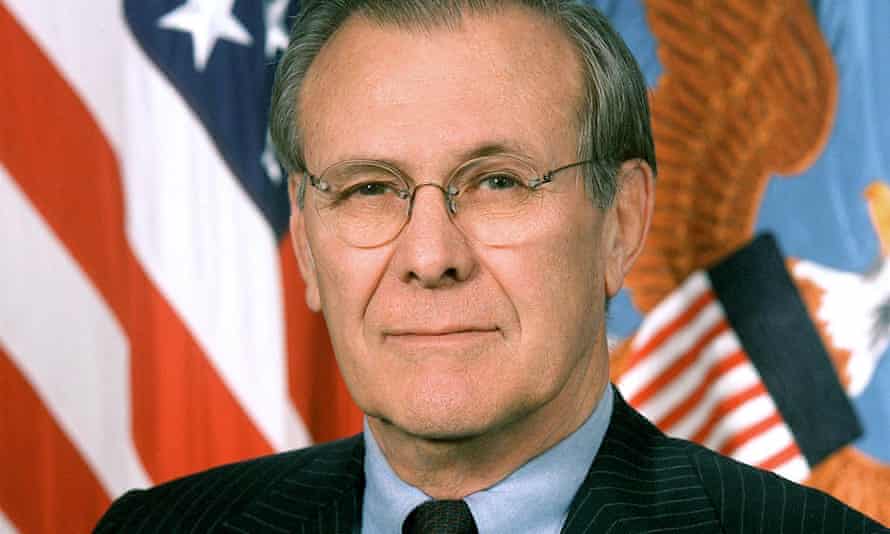 Donald Rumsfeld, 88, two-time US Secretary of Defence and a chief architect of the invasions of Afghanistan and Iraq, died on Wednesday, his family said in a statement.

“It is with deep sadness that we share the news of the passing of Donald Rumsfeld, an American statesman and devoted husband, father, grandfather and great grandfather.

“At 88, he was surrounded by family in his beloved Taos, New Mexico,” the statement said.

“History may remember him for his extraordinary accomplishments over six decades of public service, but for those who knew him best and whose lives were forever changed as a result.

“We will remember his unwavering love for his wife Joyce, his family and friends, and the integrity he brought to a life dedicated to country.”

Rumsfeld was a towering figure in Washington, having served as secretary of defence first from 1975 to 1977 under President Gerald Ford and then, after decades in the private sector, from 2001 to 2006 under George W Bush.

He played a major role in Washington’s response to the September 11 attacks.

It was during his second tour at the Pentagon that Rumsfeld became a lightning rod for controversy.

Critics called him a warmonger, accusing him of misleading the US into war with claims about Iraq’s weapons of mass destruction that never panned out.

Rumsfeld was also blamed for the US military’s abuses and torture at Abu Ghraib prison in Iraq, incidents that provoked worldwide shock and condemnation.

As the US became more deeply mired in the war in Iraq, he was known for both his uncompromising policies and his inflammatory statements toward the domestic opposition and about foreign allies and foes alike.

“Stuff happens,” he told reporters in 2003 amid the post-invasion looting and lawlessness in Iraq.

Rumsfeld was born July 9, 1932, in the Midwestern state of Illinois.

After his years as a pilot and flight instructor in the US Navy, Rumsfeld came to Washington in 1957, where he worked for a congressman.

In 1963, at the age of 30, he was elected to the House of Representatives as a Republican congressman for Illinois.

He left in 1969 to serve in various advisory roles under president Richard Nixon.

After a year as ambassador to NATO in Brussels, he returned to the capital and became the youngest secretary of defence in US history under President Ford.

He left government to enter the private sector, where he remained until he was tapped by Bush to lead the Defence Department in 2001.

Under Bush, he became the longest-serving secretary of defense at the time.

He vehemently supported the development of missile defence in space and helped turn the lumbering armoured US forces of the Cold War into a more mobile outfit with state-of-the-art weapons.

But Rumsfeld would be most remembered for the Iraq war, which began with the March 2003 invasion and overthrow of then-president Saddam Hussein.

As chief planner of the military campaign, Rumsfeld repeatedly faced heavy criticism and calls for his resignation as Iraq descended into chaos and bloodshed.

In late 2006, Bush parted ways with his defence secretary after a devastating Republican defeat in mid-term congressional elections that became a referendum on the increasingly unpopular Iraq war.

“I think that Donald Rumsfeld will go down in history as one of the worst secretaries of defence in history,” the late Republican presidential candidate John McCain said the following year.

Reacting to the news, President Bush described him as “a man of intelligence, integrity, and almost inexhaustible energy” and an “exemplary public servant” who “never flinched from responsibility”.