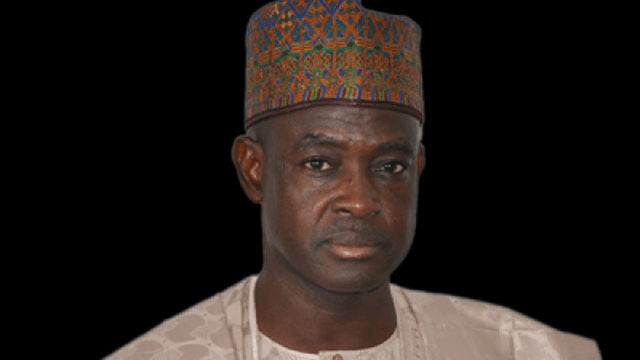 Taiwo Olorunyomi, an Independent Corrupt Practices and Other Related Offences Commission investigation officer, on Friday told an FCT High court, Apo that Bature Masari, Director General, Small and Medium Enterprise Development Agency, gave N50 million to some members of the  House of Representatives.
The witness, Olorunyomi, made the allegation while testifying in the ongoing case of contract fraud filed against Masari.
Masari is charged with 27 counts bordering on fraudulent award of constituency project contract worth N184.5 million.
The witness informed the court that based on a petition written by one Jubril Usman against Masari, the ICPC began investigating the award of contracts by Masari.
He reported that in the course of investigation, the anti-graft commission requested for the defendant’s bank statements from Guaranty Trust Bank, Diamond bank and First bank.
While analysing the bank statements, he said the ICPC discovered that some contractors made several payments into the defendant’s account.
Olorunyomi informed that one of such payment was N50 million deposited into the defendant’s Diamond bank account by one Hamshaki Ventures.
Hamshaki Ventures is one of the contractors that collected contracts from Masari during his tenure as DG.
The witness also alleged that the money was shared to four members of the National Assembly, representing Benue.
He alleged that N9 million each was given to Heman Hembe, Benjamin Aboho, Orker Jev and Emmanuel Memga for  contractors to execute their constituency projects.
He said: “We discovered in the course of investigation that Hamshaki Ventures, a company which had got several contracts with SMEDAN lodged about N50 million on Nov. 27, 2014, through the Diamond account of the defendant.
“The bank statement indicated that this N50 million was distributed to the aforementioned honourable members.
“These honourable members of the National Assembly, representing Benue State, had constituency projects and these contractors carried the projects out.”
Olorunyomi further said that they discovered that the defendant gave another N3 million each to Anthony Madwatte and Mahmud Wambai of Adamawa state to give constituency projects out.
He also reported that when the defendant was questioned in regards to the purpose of the payments, Masari said the money was payments for farm produce supplied to contractors.
The witness also said that Masari promised to produce the receipts of the payments but failed to do so.
Olorunyomi tendered evidence that included the bank statements, Masari’s written statement and payment vouchers to support his claim and were marked as exhibits.
Counsel to the defendant, Etim Okoye, prayed the court for an adjournment to enable him to prepare for cross- examination.
Justice Olukayode Adeniyi adjourned the case until June 25 for further hearing.