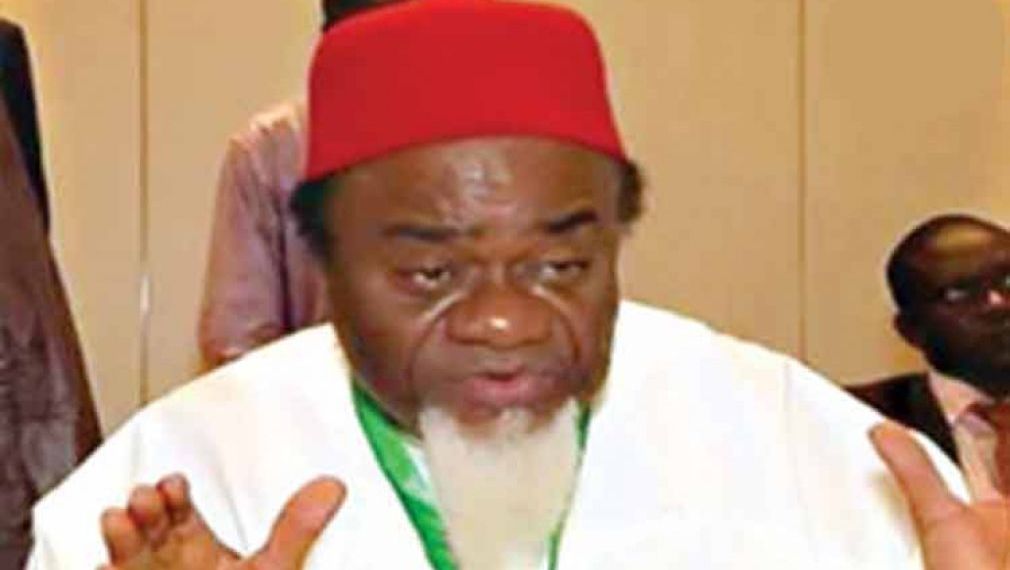 Former governor of old Anambra State, Chief Chukwuemeka Ezeife, is one of the people attending the trial of the leader of the Indigenous People of Biafra (IPOB), Nnamdi Kanu, at the Federal High Court, Abuja.

Ezeife told the News Agency of Nigeria (NAN) that he was in court to represent the Ndigbo (the people of Igbo extraction worldwide).

Kanu is expected to be brought before Justice Binta Nyako to answer to some charges preferred against him by the Federal Government of Nigeria.

NAN, on June 29, reported that the judge had ordered the IPOB leader to be remanded at the Department of State Services (DSS) facility pending the hearing and determination of the matter

The order followed an application by Counsel to the Attorney General of the Federation (AGF), Shuaibu Labaran, that Kanu, who jumped bail and rearrested, be remanded in the DSS custody.

The court also granted the request that the matter be given accelerated hearing to guard against delay in justice and fixed today for trial continuation.

NAN reports that Kanu, who was rearrested on July 27 abroad, was said to have jumped bail around September 2017.

He was, however, produced before the trial judge, Nyako, on June 29 to stand his trial.

The judge had, on March 28, 2019, issued a bench warrant for Kanu’s arrest after she revoked the bail that was earlier granted him.

Relying on Section 352(4) of the Administration of Criminal Justice Act (ACJA), 2015, the court equally okayed Kanu’s trial in absentia.

Kanu was arrested on October 14, 2015, on 11-count charge bordering on terrorism, treasonable felony, managing an unlawful society, publication of defamatory matter, illegal possession of firearms and improper importation of goods, among others.

He was charged alongside three other pro-Biafra agitators –  Chidiebere Onwudiwe, Benjamin Madubugwu and David Nwawuisi.

Shortly after he was declared “missing,” Justice Nyako, on February 20, 2018 okayed separate trials for the other three defendants.

The IPOB leader who has dual citizenship was before his arrest reportedly sighted at various locations outside the country, including Jerusalem and the United Kingdom (UK).

Kanu who was the Director of Radio Biafra was initially arrested by security operatives on October 14, 2015 upon his arrival to Nigeria from his base in the UK.

He was subsequently arraigned in court on January 20, 2016, and remanded at Kuje prison in Abuja.

After he spent about a year and seven months in detention, the trial court, on April 25, 2016, released Kanu on bail on health grounds.

To secure his release, Senator Enyinnaya Abaribe (PDP–Abia); an accountant, Mr. Tochukwu Uchendu, and a Jewish High Priest, Emmanu El-Salom Oka BenMadu, on April 28, 2016 signed an undertaking to ensure his attendance in court.

Following Kanu’s disappearance after he was released on bail, the court, on November 14, 2018, ordered the three sureties to forfeit the N100 million bail bond they each consented to.

All the sureties had since approached the Court of Appeal in Abuja to challenge the ruling.

Kanu’s lawyer, Mr. Ifeanyi Ejiofor, had equally protested the revocation of his client’s bail, even as the court rejected his request for time to file an affidavit to explain why he jumped bail.

Ejiofor had insisted that Kanu’s disappearance was occasioned by the unwarranted invasion of his home at Afaraukwu in Abia State by the Nigerian Army.

This claim Kanu restated when he was brought before the court after his rearrest.