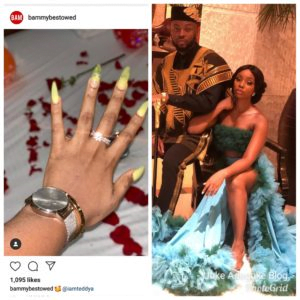 Big Brother(S3) “Double Wahala” housemates, Tope Adenibuyan aka Teddy A and Bamike Olawunmi aka BamBam are engaged.
News Agency of Nigeria reports that the ‘Double Wahala’ housemates announced their engagement through their instagram handles on Sunday.
BamBam @bammybestowed and Teddy @iamteddyA posted a picture of the ring on BamBam’s finger with flowers petals reading ‘Will you marry me?’ at the background.
The two reality stars began their relationship during their stint on BBnaija. They were paired together by Biggie and tagged ‘BamTeddy’.
While the relationship progressed during the show, they came under heavy criticism for having sex. Some fans also expressed scepticism over the genuiness of the relationship.
However, they began to get more public support following their eviction from the show. Teddy A cried and stayed moody when BamBam was evicted. He was evicted the next day.
Once outside the house, they both continued their relationship, expressing feelings for each other on social media and in interviews.
While it was well-recieved by some fans, others expressed their doubts. Meanwhile, congratulatory messages are trending on social media following the engagement.
@IamFemiJoseph said, “Can something good come out of #BBNaija? Yes, Teddy A and BamBam.”
@Younfhope14 said, “I remember all the housemates called them fake but look at them today, I am so happy seeing this.”
@Myoxygen tweeted, “”Teddy will dump her after that show”.”Teddy will shatter her heart”
“It is fake until he puts a ring on it” I hope you learn to shut up from today!!! You’re still single…Bambam is getting married.”
@Mayowamoony said, “#BBNaija Bam and Teddy’s Love story line everyone thought it was fake and wouldn’t last today they’re engaged.
“It’s a great love story because we watched it grow , from dust to diamonds Congratulations @bammybestowed.”