by The Eagle Online
in Politics
1 min read
0

The former National Publicity Secretary of the All Progressives Congress, Mallam Bolaji Abdullahi, has resigned his appointment as the Chairman of the Nigeria Sugar Development Council.
Abdullahi’s resignation of his chairmanship of the Board followed his decision to quit the ruling party at the federal level.
Revealing his position on his Twitter handle on Friday, Abdullahi wrote: “Following my resignation as National Publicity Secretary of APC and my decision to quit the party, I announced to the board this morning that I have resigned my appointment as Chairman, Nigeria Sugar Development Council.”
Abdullahi had on Wednesday resigned as the National Publicity Secretary of the APC.
The resignation came after those of his political leaders: the President of the Senate, Dr. Abubakar Bukola Saraki; and the Kwara State Governor, Abdulfatah Ahmed.
In resigning, Abdullahi said his office had been denigrated, with matters that fell under his purview being given to others to handle.
He said his office was no longer respected all because of the political belief and following.
Abdullahi, as at press time, was yet to reveal his next move.
Saraki and Ahmed have since announced their membership of the Peoples Democratic Party. 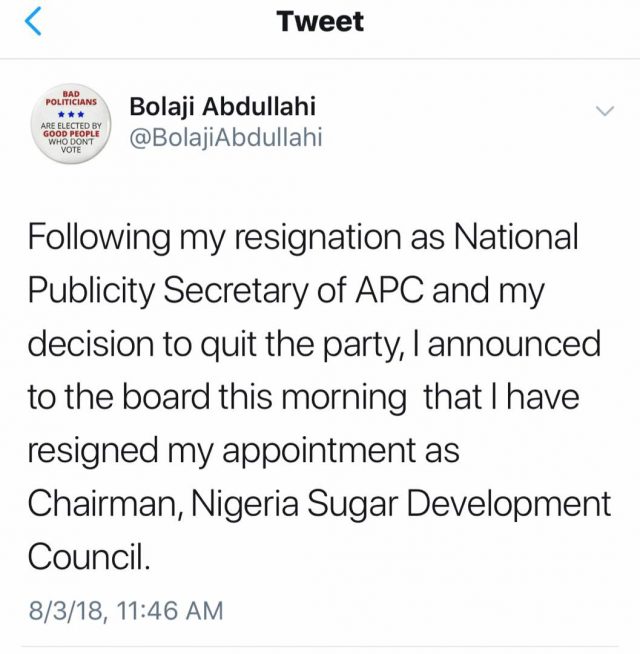 Breaking: Tinubu to Obasanjo on Kashamu: Death inevitable, we need be kind to the dead

Man who sold his day-old baby for N900,000, five others arrested

Davies misses Bayern Munich training ahead of duel with Messi