Everton’s Gomes to have surgery on broken ankle 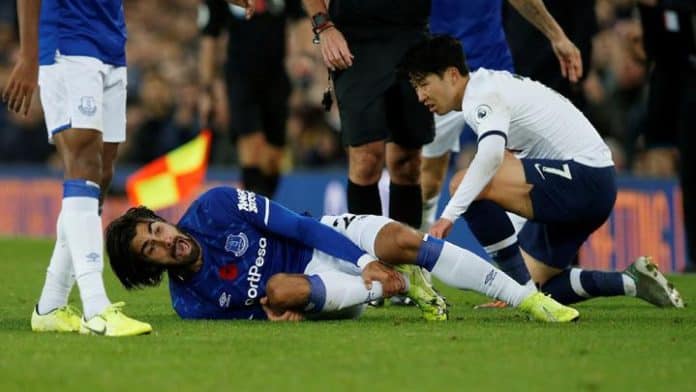 Everton midfielder, Andre Gomes, will have surgery on Monday after suffering a fracture-dislocation to his right ankle in their Premier League match against Tottenham Hotspur, his club have said.
The Portugal international sustained the injury in the 1-1 draw at Goodison Park on Sunday after landing off balance at speed following a tackle from Spurs forward Son Heung-min.
Everton released a statement confirming Gomes would need surgery but did not set out a timeline for his return.

Manager Marco Silva has backed the 26-year-old to make a full recovery.
“We will give all support to Andre and his family,” Silva told reporters. “As a group we have to stay together.
“He is seriously injured but I am 100% sure Andre will become stronger as a football player and as a man because he is a fantastic lad, a fantastic professional.”
Son was shown a red card for his part in the incident and was in tears in the dressing room afterwards.
On Monday, the 27-year-old was called up to the South Korea squad for two matches later this month and national team coach Paulo Bento said his international team mates would rally around him.
“What happened in that match is really unfortunate,” Bento told Yonhap News Agency. “It doesn’t matter which country a player is from. You never want to see anyone get hurt that seriously, but it’s also part of the game.
“Heung-min has to pick things up and move forward, and we’ll try to help him the best we can.”
South Korea play Lebanon in a World Cup qualifier on November 14 before facing Brazil in a friendly five days later in Abu Dhabi.